Hello, my esteemed peers and colleagues. Today, I am here to discuss a very dire matter. One such, that it has plagued thousands of people across the world. Today, I shall be talking about why the buckets in “OrbusVR: Reborn” should have shadows for players on the Oculus Quest.

Now, before we begin, we need a bit of context. What is OrbusVR: Reborn? (hereafter known as “Orbus”) Orbus is a virtual reality massively multiplayer online roleplaying game(VRMMORPG) released in 2019 for a variety of virtual reality headsets, such as the Oculus Rift S, the Valve Index, the Oculus Quest, and the HTC Vive. The versions of the game are identical and can play with each other online, with the exception being the Oculus Quest. The “Quest” can be used to play online with players of other systems, yes, but it suffers a severe graphical downgrade. Why is this, you might be asking? Well, you see the Quest differs from the other virtual reality headsets in one major way; it is completely wireless and self-contained. This means that you don’t have the high-end PC power of other headsets. Instead, the Quest uses a Qualcomm Snapdragon 835 processor and a measly 4 gigabytes of RAM. To put that into perspective, that’s about as powerful as a smartphone from nearly 3 years ago. For a VR headset, that seems underwhelming, but you’d be surprised. The Quest can run many graphically intensive games with ease. However, while the downgrades on Orbus aren’t that big of a deal, there is one, glaring situation…

In Orbus, there are 4 primary “dungeons”, enclosed spaces where you team up with 4 other players to take on a horde of mobs in a linear environment. Throughout each dungeon are 2 bosses; one at the midway point, and one at the end. The bosses often have various gimmicks that you have to keep in mind while fighting them to eliminate [the boss] as efficiently as possible. One of the dungeons, dubbed “Sewer”, has a gimmick on the final boss that is quite easy to understand, unless you’re on the Oculus Quest. The boss, a sentient, gargantuan pile of slime. The boss is confined to a large arena, with 4 levers in each corner. Near each lever, on the roof above, is a large bucket of water. The gimmick is to lure the boss under the buckets and then pull the levers, so the boss becomes drenched and takes significantly more damage when attacked. This is quite easy for players using PCVR(Headsets such as the Rift S, Index, Vive, etc.), as there are shadows under the buckets that make it easy to see when you need to pull the levers because the boss will be right over the shadow. However, the Oculus Quest version of Orbus, as part of the aforementioned graphical downgrades, doesn’t display shadows. As such, Quest users can’t see the shadows for the buckets and must look up continuously, taking their eyes off of the boss and other enemies, to make sure the boss and buckets are aligned properly. This puts Quest players at a significant disadvantage. I say that the buckets have shadows across all platforms, not just PCVR! The Quest will likely be viewed as an inferior platform to Orbus players simply because of this one, egregious problem, that’s not even that difficult to fix!

Now, you might claim that all of the other going-ons in the dungeon strain the Quest enough, and a few shadows would be the tipping point. After all, the Quest is prone to overheat, and any measure that can be taken to minimize strain on the system should be taken, yes? After all, looking up is good for your neck! Putting it on a swivel is a great way to build those muscles, especially with the weight of the Quest. Why take out something that works the player out? It’s not a problem, no, it’s a feature of course! Those gamers stand still all day, maybe looking left or right, or waving their arms a bit. Their necks will get jacked off of the buckets! No shadows for buckets! Huzzah!

You see how absurd that sounds, right? The lack of shadows offers no boon to Quest users; merely an inconvenience. If you wanted to spare the processing power, because, god forbid, 4 more shadows, make the texture for the floor have dark spots underneath the buckets in place of shadows! A simple, practical fix that could be done in 10 minutes. And really, the shadows, just 4 of them, would take next to nothing to process, especially since they wouldn’t be moving or changing, it’d be a static grey circle on the floor. It’s not magic, it’s logic.

In conclusion, OrbusVR: Reborn should have shadows for the buckets in the Sewer dungeon across all platforms. It would be a great change, almost guaranteed to be welcomed by the community. Something so simple, yet something still not done… Quest players have been cantankerous about this for ages, and we demand change.

Tldr? I’m not in the mood to read college essays.

Give the fucking buckets in Sewer shadows on Quest

It was fun to read

I wrote this for an English class and thought “Eh, I’ll post it on the forums too” because #FixtheBuckets

Give the fucking buckets in Sewer shadows on Quest

You serious? I did countless sewers and never saw shadows.

I play on low quality like 80% of pc players I know, they do that for better performance… no one of those sees shadows under buckets

. You do that dungeon a few times and just know where to stand (and btw the shadows I personally find confusing, they are not really matching the point where water comes down or at least I don’t remember they do in the beta, where I tried showing them for fun)

I can just eye ball where the water will fall from the buckets. It takes some getting used to but it’s doable.

I wrote this for an English class

On an offtopic sidenote, I would’ve given you an A for that text, it is very well written

It just makes the dungeon a little harder. With some teamwork and communication, only one person needs to look up to make sure things are aligned.

I don’t see the shadows, I just know the locations by now. You can learn the general area of all slash areas of all buckets if you play enough.

only one person needs to look up

The thing is, no one is looking up in the endgame, you’re busy enough to go for levers, run and hit the boss… the places are on the ground, you remember them after a while and the problem is rather people panicking and not running there when the boss is on them.

However, even after 160+ Sewers it is still sometimes failing.

So if anything is done, then there should be clear outlines/marks on the ground, not shadows, where the water does come down. Specially with new players or random groups this fight can be really long else; also the challenge would be still there to pull the lever in time and avoid the boss etc. 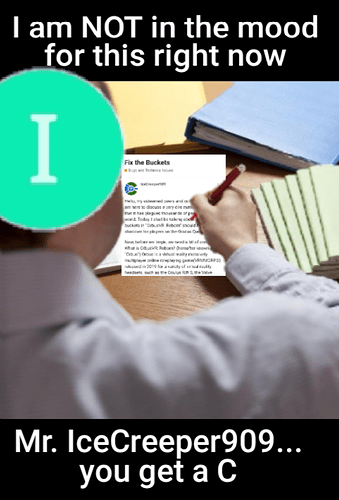 If I were you I would just go solo in sewer, paladin hammer past all the mobs to the final boss, then pull the levers over and over until you remember where they are. I always play on low graphics, which means that the shadows don’t appear, but I know where the water lands because I went in and made myself remember.

EDIT: Also, unless it was changed, the shadows never aligned with where the water dropped anyways. The shadow for almost all of the buckets was always off, so it was actually easier to remember where the water would drop without seeing the shadow.

i use the shadows in that i know where they drop in relation to them.

but if the fixed that, they should also fix the gate defense beacon while inside highsteppe. it’s way off.