I just want to preface this by saying that this is essentially a re-vamp of my initial “Slow Burn” build that I posted a while ago. I’ve discovered that there are two working variants of the build with comparable damage output. My goal with this build was to embrace the reliability of Lavawhale’s burn rotation, while making use of the Break Shot party DPS boost and, originally, to switch to using Vines as my active card for proccing tilesets. With that being said, I’ll go back over the rotation first since it’s effectively the same for both variants, and then I’ll go over the tilesets and talent setups for each variant after that.

The shot rotation and card rotation is going to be the same for both variants, with the one key difference between the two being what I’ll refer to henceforth as the “Tile Card” (the card whose tile we use in the sets). With that being said, the shot rotation is as follows:

The card management rotation for both variants is relatively simple. When you start charging a shot (the C’s in the rotation) you should be grabbing a card from your deck and immediately belting it. To make this easier, I like to keep the belt slot close to the card deck so it’s a small and quick motion to belt the next card.

The reason you want to be pulling the next card while charging your C’s and belting it immediately is to manage the cooldown on the card deck effectively & reduce the risk of your card deck glitching out when trying to draw the next card for the rotation.

Edit: Removed section here about whether or not to burn Vines or Flames, as with the help of @Infiniterune it looks like just using both cards every time, regardless of your tileset variant, is the best option. 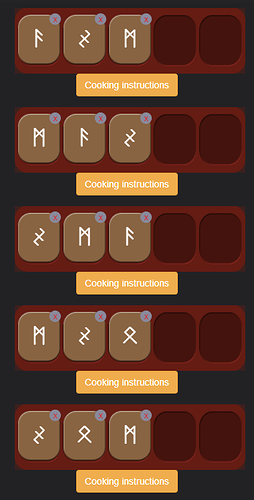 The reason I used Quick Draw on the Slow Burn Variant is because Stack the Deck increases the chances of you having to shoot off one of your Vines cards with the Spread Empowerment from burning a Flames card, which decreases the duration of the DoT from your Vines. It’s a relatively minor loss, but you want to avoid it as much as possible, so you don’t want to increase the number of Flames cards you might have to burn by going with Stack the Deck.

The reason I leave the option open here for the level 5 talent is that it doesn’t really matter which one you choose. The 10% crit chance increase on Fully Loaded is relatively minor compared to the crit chance you already have as a True Gambler scoundrel, and your magazine will not always be full when using this build. However, at the same time, you will only be using Vines and maybe Flint cards very selectively/situationally, making the added duration from Slow Burn also relatively minor and unnoticeable. The important part for this one is Stack the Deck, as Flames is your Tile Card for this variant and having more Flames cards in your deck means you get to proc the 2 tilesets that use the Flames card tile more often.

Proccing the short delay tile requires some pretty precise charged-shot-release timing. Basically you need to train yourself as best as you can to release your charged shot the very moment you see the faintest hint of purple glow indicating it’s finished charging. You can even release slightly before it actually starts to show the glowing effect and it will still be fully charged + apply the Break Shot debuff.

The ideal armor affixes and weapon affixes are still the same as they were in my original post. You want crit damage and projectile damage on all your armor, and Bleed on your gun most importantly, Giantkiller as a second affix if you have a legendary. Iceheart can also be good if you run with a lot of rotation mages. Unbending isn’t terrible, especially with the super glass-cannon nature of scoundrels who use True Gambler.

The big question anybody who’s seen the old post is probably asking is “what is the damage of the Stack the Deck variant compared to the original Slow Burn variant?” Well, in the testing I did on the fellowship hall dummy, they were both relatively on par with each-other, with the Slow Burn variant having a slightly higher average trend. The Slow Burn variant is really nice when you get lucky with Vines duplications and you can maintain consistent stacks of the DoT, it’s also cool when you have a Contamination mage (I know they are rare, but when you have on it is pretty nice for this variant). On the flipside, much like Lavawhale’s original Burn Tile build, the Stack the Deck variant of my build has much better Bleed spike potential which is a fantastic DPS boost when it happens.

I hope whoever decided to read all this enjoyed it. I have not recorded them yet, but as with my original post, I will link some demonstration videos below. I’ll get around to it like tomorrow, but just know I won’t talk much in the videos. They are purely for your visual reference, to help you see what the rotation looks like & see how the tiles proc.

Feel free to hit me up in-game or on the discord server if you want a set (I charge 50k for them) or if you have any further questions and I’ll do my best to answer them for you!

I’m just adding this here at the end to clarify the tileset option I’m referencing, but basically @Infiniterune also found that using both a Vines and a Flames tileset as the 4th and 5th options for this build and rotation is technically the optimal way to use it, at least according to Greg’s calculations.

The tiles for this third variant, which I’ve just taken to calling the “Optimal Variant” are as follows: 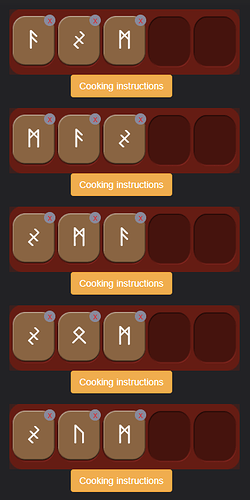 I’ll try to keep this post updated if there are any further changes to any of this! It’s also worth mentioning that I think this can work with either Stack the Deck or Quick Draw, but I and I expect Stack the Deck might be slightly better in comparison, but I just personally prefer Quick Draw for a few different reasons.

I wanted to give another quick shout-out to Lavawhale, Scott, and all the other great scoundrels, artificers, and theory crafters who helped me polish this up. I couldn’t have done it without you all. I’m really proud of how it’s turned out, and I hope some of you other scoundrels will enjoy using it!

Edit: can I tag people? @Lavawhale @NotScott and @Jutsu_The_Strange in particular, thank you guys for all the great help you gave me while trying to make this build/rotation work and for laying the groundwork for me to figure it out!

Why do you burn your flame/vines instead of using it? The empowerment that it gives is really bad and the cards themselves do a lot of bonus damage.

Also I was planning on programming your build into Greg at some point but I may as well do it now. I’ll post my results in a bit

After a remark of @FuggingSboog we found an improvement in the tilesets I use.

(this improvement came possible because I increased card grabbing speed after @Infiniterune spreed sheet pointed out the card grabbing was faster, and I changed shooting my poisons with Empower buffs in the code a while ago too. But did not check updating tilesets since then. So now we got better ones

I’m assuming you changed it to 2 seconds + reaction time?
also I’m not sure if you fixed it when you checked the new tiles but I noticed right now that I think you accidentally made it so that every normal shot is counted as being supered because you have a normal super shot as ‘B’ instead of ‘s’.

Same thing happened with Shaman that I fixed today too

Okay fixed and pushed. Pull new version. This basically has fixed for all 4 classes in haha.

Scott without drawing from deck (just shooting for no build baseline dps comparison): 62,500
0%

at some point I might make healing tiles for sboog’s build but his tile proc efficiency is already so high that I really doubt you could really get that much benefit out of them aside from the fact that if you don’t have a choice about receiving healing, your normal tiles will proc worse.

also my hybrid build is still underrated AF. Its the highest damage alternative to Scotts and nobody uses it

Updated tiles for anyone who wants to copy them:
Better Scott’s tiles

I justed tested the poison build with using flame card without changing anything else and I was right:

you do more dps when you use flame instead of burning it. the lower tile proc effectiveness is also a minor positive because it means there is now more room for further tile optimization and healing tiles could be slightly more useful.

It still does less damage than lavawhales build though

I only burn it if:

A: It’s not the Tile Card of the variant I’m using
B: I need to proc tiles bc my buffs have expired

I understand that the spread empowerment isn’t ideal, and I try to avoid it if I can by using the Flames as much as possible, but losing the 2 ticks of the Vines DoT because of a spread empowerment is a lot less detrimental to my DPS than the alternative of burning it to maintain the uptime of the tileset buffs. Otherwise I end up going like a full 4 seconds without proccing any tilesets.

yo that’s cool! thanks for the information!

Edit: @Infiniterune what difference does it make with the Flames variant if you use the poisons instead of burning them?

Tile set for both builds:

So that pretty much settles it, no matter the variant being used, it’s always better to use both the Vines and Flames card as opposed to burning one for tile procs.

Sboog just had me optimize some healing tiles for his build

talents are the same as poison build above

Here I was thinking “man, looking at the card before I decide to burn or use it is a lot to juggle” and you guys are over here thinking in 4D. Y’all are awesome.

I think 2.2 seconds + 0.3 human reaction time would be more realistic. That is why I made it those timings.

ohh thats what it was before. I thought you changed it from the version you shared with me before. Ill update the numbers above.