Looking for information tips for Players

We are going to start using the pop up system we have implemented that shows you a screen at login, to try and get more information to players in game when they reach certain levels in game. For instance when a player reaches level 5, when the player logs in next time it will tell them about the talent system and how to select a talent.

I was looking for some feedback from the playerbase as to what they feel is important information players might not readily know (not class specific information) like a level 30 there are overleveling perks you can select.

You can either just post the information below, or let me know what level you feel it would be most appropriate to, like level 8 give information on random dungeon queue and how there is a reward for the first run everyday.

Combat is deadly. This isn’t your typical MMO where you can take 30 mobs at once.

This game is skill based. It WILL take time to get the hang of things.

Dungeon Queue dungeons scale, so you’ll be fine going in as a low level.

Dungeon and Raid Queue give bonus XP for the first run each day.

You get a “Roll” once per day in shard dungeons. This will give you a guaranteed piece of equipment at that level of dungeon.

The best way to level up is to do missions from the vendors in Highsteppe.

Whether you get a fish while fishing is determined the moment the lure hits the water, so you can reel in quickly without losing the chance of fish biting.

The Auction House has a 2% fee everytime you buy or sell anything on there. Factor that in when making purchases.

Bard has two mallets. I know you said not class specific, but the number of times I’ve blown people’s minds by telling them that…

Dev Slayer is a title, not a Dev.

Different materials are found in different parts of the world. You’ll have to explore the realm if you want to get different alchemy and artificing materials.

People with the Dev Slayer title are not Devs.

Fish are found in different parts of the world. You may have to go to specific bodies of water for certain fish.

How long X potions last for.

Anybody can create or join a Fellowship.

Tiles are like custom enchantments that increase your damage and healing by performing certain actions.

Each day you get 5 Mission Credits. You can’t hold more than 25. Use them to get missions to level up and get rewards!

Consider joining the unofficial Discord (or would that make it official?)

Always feel free to ask for help. The community is pretty friendly!

Every class is viable at every level of the game, so don’t feel pressured to play one class over another.

Major and minor shards Can be used to trade up into glimmering shards.

Make sure to take advantage of all the different chests in your house if you need additional storage.

The runes in your journal are more accurate than the runes on pillars (potential fix coming?)

You can use sliding locomotion and teleport to get faster speed in combat.

Some missions are designed to be done as a group. If you’re having trouble, try teaming up!

Will Edit as I think of more

Mishka has some great ones. Here are some more that i wish more info was available on when i was a sprout:

That you should do dungeon queue as soon as possible

Ehm, no? The opposite is the case, it was said times and times again here that the most frustrating experiences - for both sides, new players and the group - are groups where players join in their first couple hours. You should learn your class, get used to vr controls, level up, and then slowly start dungeons (if at all… the xp from there is neglectible, dungeon gear you overlevel in an hour, so you can as well level to 30 first). There’s an achievement “dungeon ready” for a reason and for reborn it actually should not be 8 but even higher.
The mobs in 2 of the queue dungeons are level 10-based, the mobs in the other 2 are level 20-based, so if you’re way below that, despite levelscaling (which is not 1:1, it still puts too low players several levels below mob level), you can barely contribute.

More money in the auction house: Questionable for most common materials, like those from chests. Imo you’re better off selling these rightaway to vendors instead of letting them rot in the AH for 3 days.
There’s other tipps needed for the Auction House though, like:

Grinder: well you cant use it “everywhere you go”, only on mobs which are not too low level for the current stage it is in… and this definitly needs more explanation.

Other tipps are fine.

Ehm, no? The opposite is the case, it was said times and times again here that the most frustrating experiences - for both sides, new players and the group - are groups where players join in their first couple hours.

Sorry, yes, i stand corrected. I meant as soon as you’re the “appropriate level” but i do think it should happen sometime before you’re 30… perhaps around 15-20. I think it’s really important because it exposes you to a lot more teamwork and also provides you some basic dungeon training before getting exposed to shards etc once you hit 30.

maybe something about the raids once you hit level 30

edit: somebody said this already im not special

Also have had questions about these things as i was “growing up” but not sure what the appropriate method of presenting this information is to the user aside from the obvious community wiki’s and tribal knowledge:

Not sure if this was said (I’m not reading all that mishka!!!) where different things are. For example, where Darius is, where to get your weapons, that your mic is on by default, that class info is in the back of your journal, how pvp and world pvp works, that if you turn on world pvp you are consenting to being killed

Reitterate that Mage is an advanced class…

if you are having dificulties, to ask a more experianced Mage. We tend to be friendly and will help you.

Thanks for all the tips, what about some level specific ones. Say for Level 15,20,25---- Anything you wish you new about the game as a whole (like about dungeon queues, talents, etc)

Say for Level 15,20,25---- Anything you wish you new about the game as a whole (like about dungeon queues, talents, etc)
Heres an example of our WIP Level 5 popup. 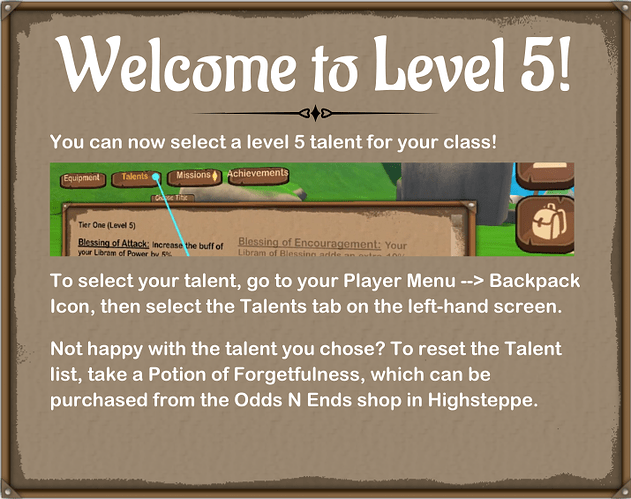 Anything you wish you new about the game as a whole (like about dungeon queues, talents, etc)

Aside from things already outlined above, some of which could definitely be categorized by levels, some tip examples i could think of are:

Also add a book of tips of all of them somewhere amusing.