Are we going to be getting our old raid gear transmogs anytime soon?

Yea plaaaase I’m waiting for it

With how many bugs are being found and the fact that they are in the middle of finalizing the raid beta I doubt it. I mean it is a feature they promised for sometime after launch but still don’t have it done. They have probably been too busy fixing bugs. I do think it is overdue for our transmogs but you also have to keep in mind Reborn has not actually been out that long and they would be remaking every piece of armor they stated (Either Wilds or Base Tradu to hard/expert raid gear). That would be 6 sets of gear including Wilds gear and 5 without. With 4 pieces of gear for each that would be 20 armor pieces they have to remake for 4 classes and they can’t reuse assets as they are fully remaking them. That gives a work load of 80 pieces of armor that they now have to restyle for the current art style as the old one would not fit well but that also does not include all the weapon transmogs which I hope we will get as well.

Though I do hope that due to them remaking the stuff that we don’t loose the style that was meant for it: Imagine the Spiro hat for mage not being big and goofy. If it was a more normal hat it would not capture the feel that most mages got for the hat

Riley isn’t the only dev, in fact he isn’t even the dev who would be working in this at all. It would be the multiple artists making the gear and then Jake since he is the item realization guy

What I am getting at is that there are so many bugs they have to handle first. Yes that does not do anything for the artists and there are 3 specified as a 3D artist and they won’t be slowed down by bugs. Though you also have that the 3D artists not only have been hard at work on the raid update and all the modeling for that and could and likely are still working on those models.

Then there is the workload of the adding of transmogs. For armor only they need to fully remake gear either wilds or tradu to the hard/expert mode stuff. That results in around 80 without wilds gear being remade or 96 with wilds gear being remade of individual pieces of gear that need to be made from scratch and that would be a pretty long time for 3 specified 3D art developers as that was what was promised. They cannot reuse anything and the style of art for the game has changed and the gear itself would need a style change to fit in but if it changes too much its not the stuff anymore. As these pieces get done Jake like you say would and I think Riley might want to look at them as well as he is the lead developer but they also have their own jobs for creating the game.

It would make sense that by the time reborn was released fully that the 3D artists started to work on the raid patch models after getting art to not waste time. Not only does it help get the models perfect before launch but also makes sure time is not wasted. This time is usually always used by developers and sometimes the developers still did not have enough time.

The 3D artists seem to for a while now be focusing on the raid beta and fixing up less polished existing models. They have a big deadline with the raid which would require many assets and they are a very small group of 3 specified 3D artists. They would have needed time to make a lot of assets for the beta and therefore would not have time to work on transmog. Once they are done with the modeling they might move onto transmogs which is likely but also might have a different task from Riley for next task.

Depending on what lead developer Riley decides their next task is that is what will happen. It would probably be transmogs for the next task but again 80-94 indivigual pieces of gear built to a new style but also have to have it be styled how we remember. They cannot reuse as they said the gear was a full remake of the gear. Even if they did not they would still have to as the gear the used in the old game were probably unity assets and therefore unoptimized for VR. That and you could not just take the old gear and plop it into the new game, the styles would not fit well and the player model has changed and now can have minor feature differences so the armor would have to be made so that someone with maximum weight in game or minimum weight still look good in the armor.

Riley isn’t the only dev, in fact he isn’t even the dev who would be working in this at all.

Information on the “Blame Riley” saying
Riley is the one dev that mostly everyone knows so when a bug happens to someone in the game and they don’t know what happened. If they are in a party with experienced players such as a level 20 helping someone do their quest then they would explain the glitch and maybe say blame Riley.

Another instance it could be used is if you are running a shard and a boss glitch happens like the sword stops hitting or shield stops hitting. If your on a high shard and it happens when your on time for 15 minutes half way through the fight you get pretty annoyed.

I want to look pretty again

I am already pretty… this cuteness isn’t top-able 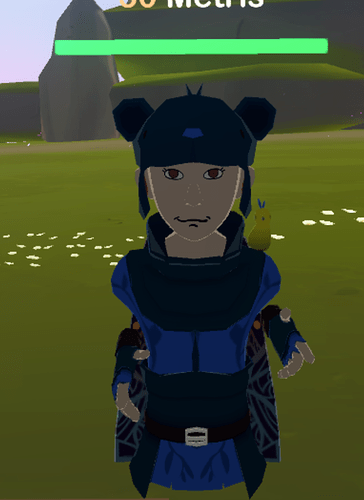