Hey everyone, we’ll be releasing a patch on Tuesday (originally announced for Monday, but we are moving it to Tuesday), featuring the continuation of the Explorer’s League main story quests, as well as bugfixes and improvements.
Check out our blog for an overview of the new quests.

Wait - the chest transmog blueprint was obtainable all this time? I’ve only ever seen one person with the transmog. As for the gear mount blueprint, there was an issue? I have 4 x3

The super charge potion sounds like a good investment to have.

The Explorers league quests, which are gained through speaking to Randel outside the gates of Highsteppe (the tutorial NPC), were added in this patch along with a few other siude quests like the Kings Dinner and 2 Brotherhood quests. There will be a patch coming out later(Hopefully not too long) that will have the rest of the Reputation Lore quests.

^ 8 months ago - coming out later(Hopefully not too long) that will have the rest of the Reputation Lore quests.

Oh, gotcha. I checked and for now that’s how it’s supposed to be, the next lore quests will pick up from that one and we’re working on those, hopefully we’ll have them in the game sometimes soon.

Will those drop with the potion drops at the end of dungeons too?
Also can we get x5 and x10 recipes for it? Otherwise actually making enough to use them will be rly bad.

only for high shard levels?
shouldn’t balancing be the same for everyone?
and when does it start to count as high level?

Does it update the currently already existing ability reset potions that players own. Or will it be only new made potions that become super charge potions?

shards 1-13 already have the same chance for everything, only shard levels 14-15 had a higher chance of being temple/mine

It should, yes. Everything is replaced in-place, recipe etc.

What exactly does this mean?

When you drink a potion it’s supposed to show a particle effect of the liquid coming out of the bottle. (Or at least that’s how it was made originally). Before the fix, this was simply not showing at all but more importantly it was throwing some errors behind the scenes so that should be good now.

Our original plan was to release those before we put out the second half of the Explorer’s League main story quests, but we had to move them first. We still plan on releasing the additional lore quests this year. Note that this is going to be quests, and not additional reputation levels at this point.

The patch will be live in about 45 minutes.

Client updates are available, restart Oculus or Steam to receive them.

Patch should be live now!

Nop, not after countless restarts. Would be great if Oculus Store wasn’t so lame every single time…
Edit: Now it’s 30mins in, nothing… is that normal?

Please note, there is an item here that should not be on the store, so don’t purchase it. It was a placeholder while working on code so it shouldn’t do anything. We’ll get it removed. 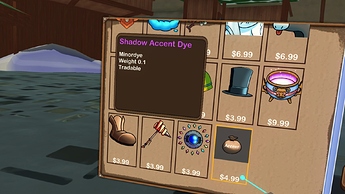 Nop, not after countless restarts. Would be great if Oculus Store wasn’t so lame every single time…
Edit: Now it’s 30mins in, nothing… is that normal?

It worked for me shortly after the patch, so I don’t really know. Try letting the Oculus software be offline for a few minutes before restarting maybe?

It was a placeholder while working on code so it shouldn’t do anything. We’ll get it removed.

Will there be a timer for further updates? because we are starting shards now…