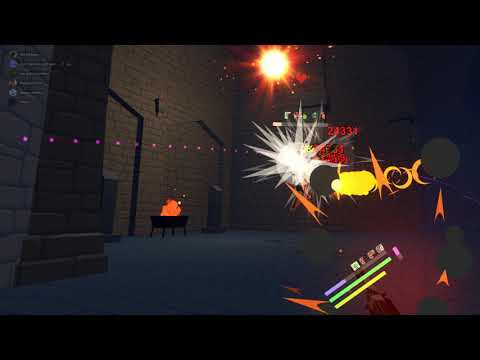 If something goes wrong, I’m worried about changing class because then I get that silly multiclass glitch where I’m 2-3 classes at once and even more useless.

I can only be so optimistic/patient. The bugs are too many, too persistent, too often.

On the topic of borked…

Since the 7/13 update I have also noticed a lot of people playing the Ghost class…
…and experienced much greater instability than I am used to.

I also choose to be patiently optimistic!

I do really understand your frustration and we are still investigating for solutions to these issues. I wish we had something more solid to announce right now but we are doing research to find out where these problems occur from. Throughout all of 2021 we’ve made dozens of backend fixes to tackle desyncs and server instability.

Unfortunately, finding these class-specific desyncs has been made difficult by the fact they are not caused by visible errors either on the server or client side nor are they a result of detectable lacks in server performance or other metrics. We’ve not given up the mission to get them fixed, however, and we appreciate your patience.

Don’t forget the new ghost casting that appeared with the beta release of citadel and has only gotten worse, strong reason I have been leaning away from my mage and just dealing with the Scoundrel issues.

Also Musketeer turrets breaking and not returning and orbs not respawning on their normal timer.

Warrior shield has also had some issues of mobs just swinging right through it on occasion, and the charge randomly not working when you need it most.

Every class currently has game breaking problems, at this point it’s about picking which one is the least annoying to deal with when it occurs.

And the problems don’t end with “just” regular gameplay. Often simple things like inventory state breaks too. Here’s is an example of something i encounter quite often:

I can not for the life of me, and you will have to excuse my ignorance here, understand that these issues have persisted for ~3 years in two “versions” of the game without you being able to track down the cause(s).

But there is no doubt in my mind that these reoccuring (for me, every session) issues have a direct impact on the player base and player retention.

Do you mean when you submit a spell and get nothing back? No pop, no spell? If so that’s nothing new, been around for ages, just gotten worse recently.

It was always there but, for me the Ghost Casting had improved quite a bit over time… but since the update on the 13th it has been very common and it is really frustrating…

Don’t forget the warrior shield still being in the way, even when you hold it off to the side, so it breaks before a tankbuster.

I’m still in awe of the fact that these problems even exist.

I have been a gamer since the first Apple computer came out. The progression of technology from then to now is mind blowing. Me and a friend years ago predicted that whole rooms in ones houes would be dedicated to total immersion experiences, movies and games alike. I never thought first that it would come to pass in my lifetime and second that it would involve the environment being placed in ones mind via a headset.

This technology is in its infancy and will only improve over time. In ten years you will look back like I do at the game Pong and say wow.

Enjoy the ride. These guy’s have given us an experience that is beyond belief and deserve praise and feedback not complaints. It’s a game and a hell of a game at that.

I’m still in awe of the fact that these problems even exist.[…]These guy’s have given us an experience that is beyond belief and deserve praise and feedback not complaints. It’s a game and a hell of a game at that.

There is a contradiction in here somewhere. Yeah, i am in awe that we have reached the VR stage too, and in this regard the Orbus team certainly deserves lots and lots of praise!

But multiplayer games and hence working net code that ensures synchronizity across clients has been around for more than 2 decades (aka the opposite of the posted issues of which the majority seem to be due to desync). In this regard, i am stunned that these problems still exist after 3+ years of development.

Same, my first computer was the ZX81 back in '82 if memory serves. I was 7 and used the local library to learn myself to code in BASIC (since the computer itself couldn’t do much other than show a blinking cursor)

I usually hear about these bugs from quest players and I rarely experience them myself. Ghost casting was an issue until I increased framerate and overall the game is stable. But I run a wired PCVR headset with strong internet and that very well may be the reason I don’t experience these issues too much.

If its a netcode problem which is what I honestly think it is then I doubt these issues will be fixed anytime soon if ever. Issues listed above never really existed back in old game but the old game also had at peak (excluding gold rush) around 1/3 of what I see today at around 100 players online. 200 less connections is probably why it did not feel like the servers were dying back in oldgame.

1/3 of what I see today at around 100 players online. 200 less connections is probably why it did not feel like the servers were dying back in oldgame.

According do arrkers armory stats, it isn’t much higher today. Latest stats show highest peak around 300 and lowest around 80. Yet, @Mathieu_D claims they are not seeing more than about 15% server capacity (sorry, i do not remember where this was written but it should be in a post somewhere).

I also run wired (PC Rift), and i experience the issues pretty much every time i have played reborn. I also remember lots of lag and disconnections in the old game as well as audio issues like stutters (audio seems to be generally fixed these days, only experienced that once or twice in reborn).

Websocket as a protocol is inherently TCP, which makes sure packets get delivered, and in the correct order. The default connection is UDP, which is a “fire and forget” protocol that doesn’t give two shits about whether you get the packets or not.
Combine WiFi on the Quest 2, which as a protocol is super prone to interference with a protocol like UDP with no underlying acknowledgement protocols in place and you have a pretty little catastrophe in your hands.

While this hunch may or may not be accurate at all, I have found that I have about 90-95% less of these problems using a websocket connection (which you can select from the login screen just below the news for those who didn’t know), so it can’t hurt to try

I’m going to try running on websocket from here on out, because the game is nearly unplayable at end game with how frequent I’m getting these issues. Hope this fixes it.

Damn I got excited for a minute. No Websocket option on Quest 2.

Not all of them sadly. Been switching between the regular and websocket. Some days one seems to work better than the other and vice versa.

Most definitely there is. Not for everyone though, not sure why, but mine has it for sure, even on the Quest

Interesting. It doesn’t exist for me.

Mayyyyybe try scrolling on the menu on the left before you log in? I’m not familiar with the Quest, but I know sometimes the announcements get long and you have to scroll to see the options