Spawn timing
The spawn timing needs looking at. It used to be about 4 hours and 20 sec between each spawn without (noticeably)increasing over time. now however, even right after the server restart it was 4 hours and 2-3 min, which kept increasing and is now almost 4 hours and 10 min. It might not sound like that much, but it makes it really annoying to track and know when it should spawn.

Could you at the very least look into why the time keeps increasing and make it consistent, or even better, just tie the spawn time to server/in-game time, like have it spawn at midnight every in-game night. That would also increase the spawn interval to 5 hours, which would be better in terms of having it spawn at different times every day.

Multiple/Expiring shards
Right now, if there is an expiring shard in the zone the goblin is about to spawn, it’s not clear which shard it will spawn in. I’ve seen it spawn in both the expiring shard and the new shard, with not much of a hint to which one it’ll spawn in.
This needs to be changed to make it always spawn in the newest shard, or have some indication on which shard it’s going to spawn in.

Safezones and workarounds
When you have the token on you, anyone with pvp on can damage you in safezones, while you can’t do anything to them. So unless you’re a paladin or a musky(maybe bard if your opponent is really bad) you have no chance of making it to the doors of highsteppe if there is someone there looking to kill you for the token. Either, the safezone around highsteppe needs to be made way smaller(it’s already way to big in the first place imo) or a system needs to be put in place where anyone with the token can fight back in safezones for 20-30 min after the goblin has been killed.

A pretty well known workaround to this is the raid entrance, there aren’t any restrictions on entering dungeons or the normal mode raid while you have the token. So you can enter a dungeon and hide there for a while until it’s safe to go back to highsteppe, or you can enter the normal mode raid using the entrance in the rainforest and walk down the hill to the highsteppe door in the raid. This I don’t want to be taken out until the above issue is addressed tho, since the raid entrance is a way more fair route for the person with the token since there aren’t any safezones there making you defenseless.

Better of running
When you have the token(s) there are a lot of situations where killing someone would put you at a disadvantage, for example: You kill the goblin at the red dot, you then start running towards the rainforest and encounter another pvp player. If you kill said player, he will respawn at the graveyard a little ahead of you and now he’ll get another chance to kill you, except this time you have less health from the fight where you killed him. 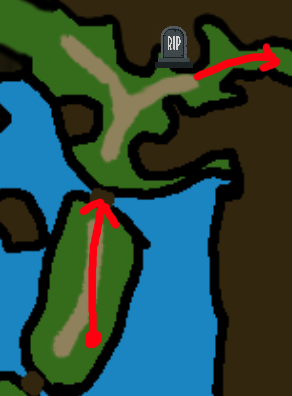 So instead of actually pvp-ing at the only pvp content in the game(not counting battlegrounds as it’s more of a pastime activity with no risk), you’re better off just running away on paladin. And there are so many more spots where it’s basically the same thing, you could try to choose paths where such an encounter wouldn’t happen, but why do that when you can just use paladin and run past everything.

This is partially an issue with the paladin teleporting(which could have a whole thread of it’s own tbf), but I think something like a respawn timer that start pretty short like a few seconds and increases for every time you die up to half a minute or something could be a way to make it a little more fair.

That sounds like perhaps a clock drift on the server? (maybe also possibly related to causing the ‘random’ d-syncs?)

bit more to add, it’s not made clear anywhere in-game that the trickster goblin is a pvp event, I frequently stumble uppon non pvp players looking for or trying to kill the goblin. not really an issue for me, but having it be clear that you need to be in pvp might make for a few of those looking for it without pvp come looking for it with pvp on instead.

Also just now, I found the person who killed the goblin hiding in a rock, I killed them with AoE attacks and their lootbag got pushed under the world by the rock, I was not able to get it.
I used advanced settings to take a look under the ground to make sure that was actually what happened(my player character and hitbox is still above ground for other players)

Also just now, I found the person who killed the goblin hiding in a rock

Pretty sure that’s against the rules

was it the same person that did it this morning?

not sure if it was the same person, messaged them and said I’d report them if I found them doing it again.