hello
you wanted to lower the chance of getting a temple or mine
but somehow you still get it out so often and it’s a little frustrating
can you divide the chance fairly so that you really don’t always get temple or mine?

I was about to post just this, especially asking back if the - iirc promised in an older thread - balance has been done yet for drops of mine/temple 14s and 15s??

The reasons for this being a good thing to do are many:

And even if ALL these points WOULD NOT EVEN apply who on earth came up with the idea not making equal droprates for dungeons anyways??
Even if all were of same difficulty, not bugged and fun, it is freakin boring for groups to do only 2 outta 5 available dungeons over, and over, and over again - for those farming legendaries.
Other groups are blocked from even getting to 15, they need to play forever for the “right” drops to proceed.

I looked at people’s recent counters who do lots 15s and the drop rate is clearly off.

Oh, and as an illustration, this tab is all my temple and mine shards (most of them higher, up to 15): 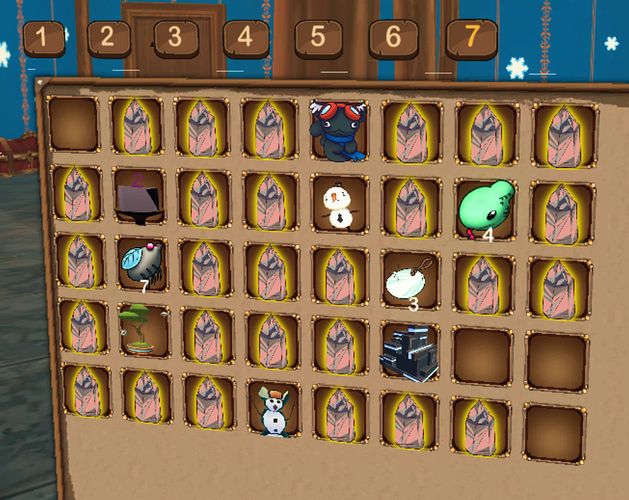 As a comparison, my Airship, Sewer, BH Shards together are never filling more than 1 row.

PS: On a sidenote, introducing special gear drops from normal mines and temples and then not adding these to the random queue sucks. I can’t find groups for transmog farming with our limited playtime and most already goin for legendarys and shards, only. So I don’t see why mines and temples can’t be scaled. That would shorten the running time, allow new players to practice the bosses before reaching shard-level and veterans who are into transmog farming to pursue these (and the mount).
Yea the bosses need explanation, but others like Sewer Slime also do and there’s normally always one or more in random groups who can tell the others.

“Variety is the spice of life” and I want some spice!

Please make the drop rate equal between the dungeons.

Agreed. I’ve only recently started doing shards, but I’ve already gotten more temple and mine shards than every other combined. I’ve never even been in either of those dungeons, nor do I know where they are. It’s frustrating, going shard grinding only to get a temple or mine.

I’ve never even been in either of those dungeons, nor do I know where they are.

Just to help out here, the Mine Entrance is in a cave in Wastelands, Portal Stone is “Old Growth” (the one next to the big tree), face the tree, then turn right, past the tree, cave entrance is near, almost vis-a-vis of dragon race.
You need to do this dungeon at least once to get a key for temple at the last boss.

Temple is in Hulthines, Portal Stone is Ocean’s Edge, then face away from mountains and turn to the right, walk straight down through the canyon (dont leave the zone, just straight along the mountains) and a little up again and there it is.

But yea, we guided alot of new people to both these dungeons and that one run normally was it. I would not mind if the entrances were added to the HS-Hub, those who wanna explore and run there in style can still do so, but the ones who don’t are at least not forced to run there anymore (still need to go back, but whatever, would be a help to do these shards rightaway once they drop).

Last time there was a thread about this we had lowered the weighting even more away from the Mine and Temple in response to player feedback wanting to see them less, but in the next patch we will do so again and they will all have an equal chance to drop.

Thanks for reducing it again. Because something did not quite work out I think…

I’m not really representative since I did not many 15s yet:

But next is a group which does more. Sometimes there’s only a slight imbalance visible (19, 23 compared to 16 crypts), however, adding to this mines and temples are mostly done after everything else is done. So this group got several mines and temples in store, currently, which would make the two last numbers much higher:

And yet another guild:

Also Sewers clearly is the least dropping lvl 15 dungeon shard, currently, across guilds; so I know there is no such thing as proper RNG but still, this is not balanced at all, perhaps worth takin a look at the current algorithm to see how that comes.

(Same with gear-drops btw… it’s hardly possible or mere psychology that every tank in the game I know searched longest for a shoulder; while, for example, I got my 5th leather +5 hat in a row… I’m drowning in certain gear parts, while searching weeks for others)