Event feedback thread (the good, and the constructive criticisms)

Lets talk about the kill quest here for a second.
[1] It’s essentially sit at the graveyard with a dozen+ other players, spinning in circles and looking to tap the next mob to get credit. The quest -can- be done over a month, but this isn’t how players think. Players want dem rewards asap and will farm them. That would also just mean sitting at the GY graveyards periodically over a month, randomly squeezing it in.

[3] The mobs were easy to kill. Archers can hit them for 50% their hp. So in a group scenario it was about tagging the mob as fast as possible. There wasn’t really any “grouping” or strong community involvement.

Let’s move on
The season change (10/10). You’ve now set yourself up for expectations of all 4 seasons heheheheh. Also, some maps like the Basin look much better now because they aren’t bright neon yellow, etc.

The monkey pet. It doesn’t hop like the monkeys you catch, but it’s pretty cool. Some players seemed unhappy that it was legendary for being so easy to obtain rather than like epic/blue, etc.

The various deco - not bad, the season/festival adds an extra level of immersion to the game. Logging in and running around felt good. People like the pumpkin alchemy pot quite a bit too.

The duration it took to complete everything. Maybe a couple or few hours? Players don’t want a grind, but more(different) content would have been nice. Like even various quests from the various NPCs (catching some kind of special fish for the fish questline, and so forth…). Maybe the quests could have been a community thing, where we help build up special-event resources towards various extra content being released at set dates, with group challenges that would require people to both group or solo… I’m not gonna delve like 1 hour into this but basically: more community would have been good. Help the chef prepare the feast quest? and so on. Have an actual feast event that players can attend, get buffs from food and maybe some kind of item? Like a chicken-leg tool? Yes please?

Random ideas:
Special ingredients you can harvest (pumpkins?) to make like pumpkin juice + some spiffy event fish and turn into a skelly boy for 5 minutes? Supplies last during the event.

Honestly, a lot of ideas… but I don’t want to explode this thread with just that. If you have any cool fall event/reward ideas, post below.

The…pumpkin? squash? that the monkeys are found in for creature capture? Nobody is quite sure what these are? Banana peels? We are all leaning towards like some kind of pumpkin(like the pumpkin lanterns seen).

The monster models. Honestly, for an event I’d say a re-skin and mob-rename is fairly acceptable. It’s just that they are like every other mob, so it’s kind of a heated topic. However the flying-boi is an actual skeleton, and the big-boi is literally wearing a black body suit akin to: 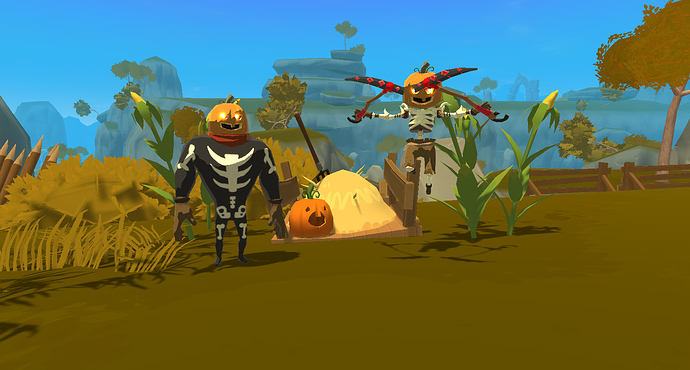 image--6--1.jpg1644×882 452 KB
I think resizing the skeleton model from crypt and slapping a pumpkin helm on him would have actually looked better. The flying boi looks pretty cool, and people seemed to also enjoy the scythes (though he just shot bolts at you). If you were looking for the stuffed-scarecrow look, then like hay sticking out from the gloves/suit might have looked better?

The kill quest would have seen more acceptable coming from the hunter NPC. I’d suppose I’d guess the main skele-boy to have some kind of more interesting questline, though there was some brief lore.

I hate to say like, “more stuff”, but more stuff? I’m not sure how templated your quests are, but I imagine for example the kill quest would have been : reskin mobs (prob would take some amount of time) - spawn them (I’d guess very simple) - set up generic npc, give kill quests (I’d guess very simple) - make special NPC skin (would prob take some time). Make the pumpkin / skeleton hand rewards (would take some time).

Testing for release:
The quest text saying like “kill 30” but actually “25” and kill “120” but actually kill 140. These are simple mistakes, and ignorable, but probably should have been caught?

There is an NPC questgiver with a backwards question mark above his head, which I didn’t notice but 2 others did.

Me and 1 other player had to relog to begin to get quest credit, not sure if this is a generic bug or a bug related to just this event.

In summary, my favorite things were definitely: the 2 rewards, and the immersion of the season and decoration, the town, even the local’s having text about the event. I liked the new questgiver, he looked pretty cool. I think that there could have been a stronger emphasis on community, as an MMO. Rathern than mainly a kill chain, “special event” type of activities, such as special harvesting/loot/fishing with associated crafting, items, etc, could have been cool. Making it all doable in one sitting was also probably ill-advised. Maybe like, make it gradual at the start through some decent chunk of dailies for the main content, and side-content you can do 24/7 (like fishing, killing mobs for special loot etc). And then perhaps for like the last week, for players coming late, remove the limit and let them 24/7 grind it if needed? Or increase the cap? Or maybe they are just SOL?

The pumpkin helmet is tradeable. The skeleton gloves are not.

The town decoration, felt good. It’d be nice to actually have more of it. The town itself is fairly empty NPC/sight-seeing. Many locked doors, a handful of NPCs. Even many of the rooms with NPCs are just empty wooden houses with a few props. There’s a level of optimization to be had. Perhaps it’s too large? The entire area underneath the tree is just dirt anyways, maybe bring that to floor-level and get rid of the underground? It’d be nice to have a denser, more well decorated area that the eye can enjoy. If you want a good example of your own work, look at the demon caves and stand near the campfire with music on. The ambiance there has real feeling, even though that camp itself could use some touch ups as well. VR can so heavily leverage immersion, and MMO’s do too. Coupling this more often would be schweet.

I agree with your assessment as well. Most common response I’m hearing when someone finishes up the kills for the mele guys “Thank god I’m done.” or some variation thereof expressing a sigh of relief to be rid and done of it." I think the decision to have them share spawns and be RNG was a poor one and is being felt by the player base.

i think everything is nice, but the spawn rates are too low
and the flyer to big boi ratio is way out of wack
especially because you need more big bois

… and all I wanted was a transmog for my horsey mount… skelly horse mount!!