I feel like people have probably been wanting me to do something like this for a while now, so I decided I’d go ahead and post it here. I’ll try to make it as digestible as possible, although I generally consider myself pretty bad at explaining this, so here goes:

I’ve made my own tileset and rotation for scoundrel that mirrors some of the aspects of Lavawhale’s Burn Tile build while also mirroring some of the aspects of Scott’s optimal min/max build. Like Lava’s build, I take advantage of the Burn Card tile to establish 3 overlapping tilesets that follow a rotation, which I’ve developed for these sets specifically. I’m going to break this down into a few different sections, starting with the tiles themselves, followed by the talents I use, and then an explanation of the rotation.

The tilesets themselves are pretty much identical to Lavawhale’s tilesets, with two variations: all of the delay tiles have been changed to a shorter delay (the Z shaped delay tile)) and the two Flames card tiles have been replaced with Vines cards tiles. You can see all 5 tilesets at the link below:

Edit: The link wasn’t working so I took a screenshot instead. 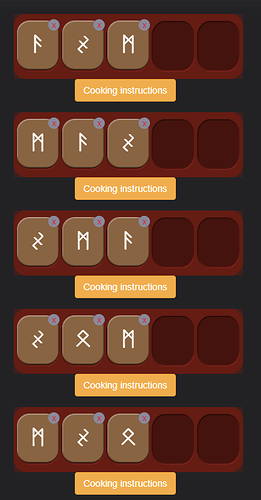 For this build, you want to run the same affixes on your armor that you would for pretty much any scoundrel build, and that’s Crit Damage and Projectile Damage.

For the talents, I use the same ones that Scott uses in his build. So you want:

The rotation sort of borrows aspects both from Lava’s and Scott’s rotations as well. I’ll provide a legend to make the rotation guide simpler below:

With that legend, the rotation goes as follows:

And then you start over again with another CC, and any F’s can be replaced with V’s when you’ve just belted a Vines card.

Try to reposition your belt slot and card deck so they’re pretty close together. Every time you’re charging a C during rotation, you should be belting the next card in your deck. If it is not a Vines card, you grab it again after it’s been belted and burn it just before releasing the C shot. If it is a Vines card, you grab it again and throw it up in the air just before you release the C shot. Also, all of your charged shots should be released at the very moment the gun begins to glow (it can even be slightly before it glows, as long as all three bullets have charged up).

If you’re timing this all perfectly you’ll notice that your blue bar will tend to stay pretty full. To counter-act this, I typically start a fight with a charged curve shot and then dump 4-6 shots into the boss before I start the rotation with another charged curve. Over time, the blue bar will fill up again, and I’ll repeat that step any time I notice the blue bar is filling up again.

As far as numbers are concerned, I was pretty experienced with Lavawhale’s build when I started making this one, and so when I was developing it I extensively tested it back to back against his build. I found that, with my personal performance and testing and ignoring Bleeds/Vines stacks, I average around about the same DPS with my build as I did with Lava’s, with the added benefit of keeping the Break Shot debuff on the boss at all times for increased party damage.

I apologize if that’s all too confusing to follow. I’ll attach some videos of me doing the rotation to this post, that usually helps other people figure it out. If that doesn’t work, but you still want to get the hang of it, find me in game. I think I’m pretty terrible at explaining this in person, but I’ll do my best to get you there.

Excuse the few mistakes I make in the first video, as I was actively trying to explain all this to Pound while trying to demonstrate it for the video, but I think you can see how it works in the moments that I’m not messing up lmao. In the second video, I replaced the CC (charged curve) shots with regular charged shots, just to give a better up close view of the burn card/Vines card shot rotation. 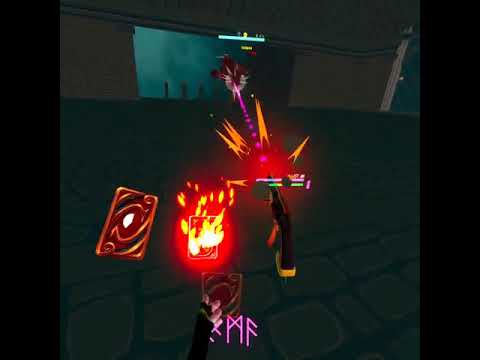 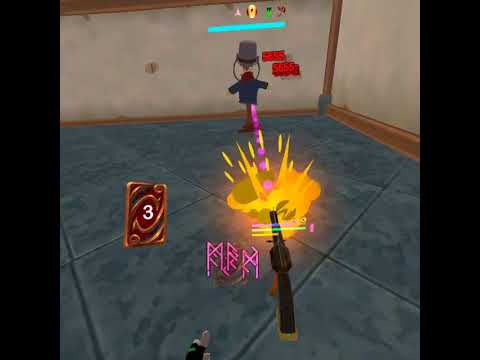 Again, I hope this all makes sense, I generally consider myself pretty bad at explaining it, but again, if you need any help and see me online in game, feel free to ask me about it, I’ll do my best to help you understand.

And here’s my top 20 shard dungeon parses in Cindy, all of which were using this build, in case you wanted to see exactly the kind of numbers I’ve been hitting with it: 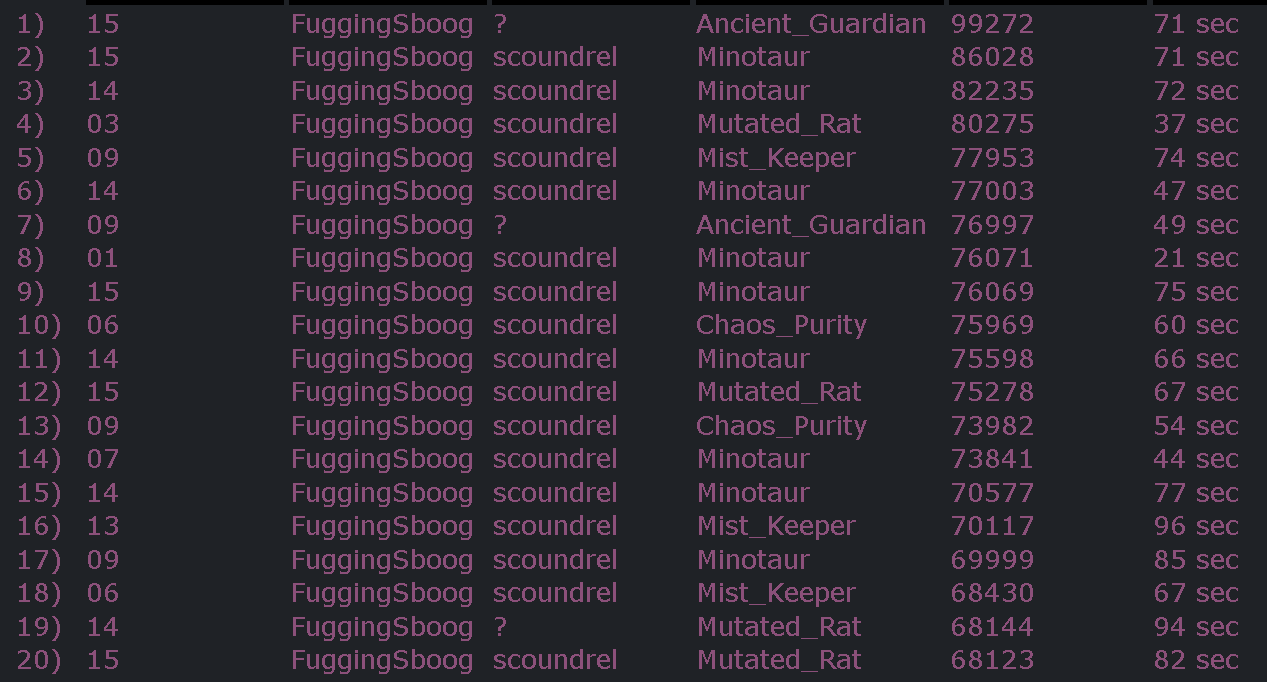 Like @Infiniterune 's build, it’s too much work for me over simply (Lava) burning each card because i’m old and slow haha. But once again, great to see more working build diversity!

Thanks for the feedback! I may even have yet another working scoundrel build to share in the near future, if I can get it hammered out and it performs well in comparison to other builds.

Funny enough I have another idea for another scoundrel build too. It might take me a while to even get a proof of concept fleshed out though because it will be much harder to play than scotts build but will hopefully be the theoretical highest damage build in the game.

I don’t think its going to be remotely usable in any sort of serious content because of how absurdly convoluted its going to be but I’m often surprised by the lengths players will go to to hit bigger numbers.

I need to do a lot of number crunching and precise data collection on scoundrel tilesets to really have a better idea of exactly how its going to work though.

Funny enough I have another idea for another scoundrel build too. It might take me a while to even get a proof of concept fleshed out though because it will be much harder to play than scotts build but will hopefully be the theoretical highest damage build in the game.

Happy to hear the plan. Can’t wait to hear if my build is beatable

Btw, a few months ago, I have changed shooting my poison also on Empower effects IF I get the tilesets to proc right before it from burning the ice or heal card. Theoretical it increased dps by a very small bit xD (can’t remember around how much)

Been searching for another +6 gun so I can finish my side set to use this build. Had the tiles made for months now. Good to see you got it posted on here Spoog, the build looks great.

I couldn’t have done it without you and Scott paving the way for me, and all the help you both gave while I was trying to figure it out. I’m glad you like it! I hope that others will too.