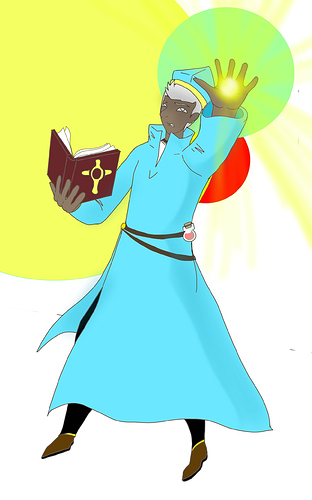 master of the holy arts! Voyager of the Light! Protector of the emfeabled!
cleric works by using his weapon, “Cleric’s tome”
Cleric’s whole gimick is the ability to choose his style of attack and healing by ordering runic syombols on his book (diffrent mixes and atches will have diffrent potencies.

With your finger the player must drag his finger across the book, selectecting his order of abilites, and so the abiliteis do not become muscle memory, the runes will shift around, change order, and sitch the appearance to a diffreent rune (that has the same meaning).
this way the player must not only know what he is reading, but they must quickly figure out what comination they want to use.

there are several runes from each catagory that are to be combined in order to make an ability.

Activation (faith): how is the spell your creating activated? Diffrent activations have diffrent potencies and effects.
Raise fist to the sky (small aoe centered onto player)
Point in a direction (sends a beam of straight light forward to peirce through targets)
Point palm in a direction (Sends a powerful yet slow moving orb that follows what was pointed at)
Raise both hands into the sky (takes several seconds of standing still to summon – creates angelic ward that tosses out spell for a few seonds before vanishing)
Swipe hand in front of self (creates an aoe cone in front of the player)

Spell type (prayer): Is it a damage spell? a heal? or an ally buff?
Damage (spell will damage enemies
Heal (spell will heal allies)
Buff (spell will put a random buff onto an affected ally)

Penalty (sacrifice): What penalty will be inflicted onto you in order to cast the spell.
Rooted (become unable to move for a short time)
Mana (lookse a bit of slowly regenerating mana)
Health (loose a bit of hp)

So as an example a cleric could open his book and decyper the runes. (point palm > heal > health penalty > instant cast) and what would result would be him pointing his palm at an ally only to create a small, green, floating orb that tracks the ally down and heals for massive health since its so slow and takes some of the users hp.

btw, before you ask YES , clerics can revive people – it works by overealing them. in order to revive somone the cleric must dump a high ammount of healing into a dead ally to bring them back from death, unlike musketeer and CERTAINLY bard, cleric specializes in revival. in combat.

just an idea i had one day…i hope the devs take an interest in the idea, and i pray that the forums dont roast me too badly. XD
and just a thought, but this concept would also work with a chemist or sientist type class.

And bless you for that little potion on the belt 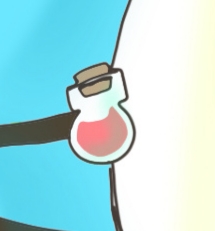 I think it’s a great idea! It reminds me of the original magic concept draft for Aleph Online. I know I’d main Cleric if it came out like this!