Today is the start of the 5 year anniversary celebration inside of OrbusVR with the patch releasing around 11 am CST.

For a full rundown of what the celebration will have, along with the rewards you will be able to earn in the coming months you can check out the blog post here. 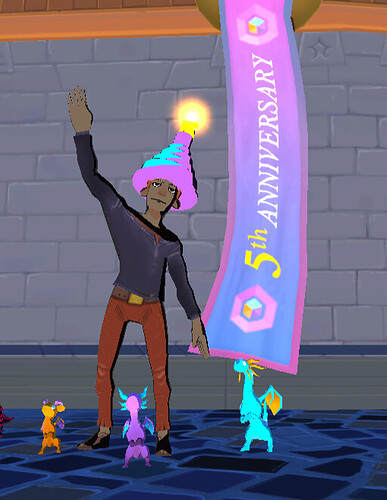 That patch is now live! Enjoy

The dungeon boss statue quest is broken - picking up any of the statues doesn’t mark it as “completed” in the journal, and even after picking up all of them, it doesn’t let us turn in the quest either

It should work in new dungeon instances now sorry about that

If you started working on the quest before the reset, you may have to go re-grab the statues that are not appearing as “done” in your journal

Why are all the statues second bosses except mines? (Dovreguben) though he does blend in better than scav shaman would.

Omg. I love the raccoons so much

Glad you like them and got a nice surprise, they will come into play for the upcoming anniversary quests. I definitely did not forget to mention it for the patch notes post… they were definitely meant as a surprise.