I can’t break the Enforcer’s Cloack, the others work fine

Beaver Reaver owner-animation broke after a short time. Stabs backwards, does a half spin, and swords swap hands.

which animation is broken? if you pet it, feed it a treat, or if someone else pets it?

Had other people pet it and the full spin was fine, didn’t try giving it a treat yet.

People are still having trouble interacting with the login menu, sometimes you just have to exit game to get back on.

So the people for those mounts are still there, it’s just the mounts aren’t following them around, basically?

If you go far away and come back, are they still there or do they disappear?

Not sure on about if those people are there or not anymore, it’s hard to tell with so many people around

Okay, thanks. We are working on a fix now.

Just FYI if this happens to you it is triggering a bug which is logging a lot of stuff to your output log, so you should probably close out and re-open the game or your output log may bloat up to like 1 GB in size or something again.

This only seems to happen if you logout and then log back in using the menu.

If this wasn’t what you were talking about then just let me know and I will get some more info and dive deeper.

OK, I understand if it bugs out and plays multiple animations again let me know and I will hunt down farther.

We just pushed client-side patch 6.81 to Steam and Oculus which should fix the “mounts get stuck when logging out” issue. The enforcer cape should also now be destroyable.

@Riley_D @Mathieu_D. Thanks for all the mounts and pets! I bought all of them! Is there any way we can get some girly hats too…like unicorn hats or cat ears? Can we also get different kinds of pick axe…like a unicorn or rainbow axe that sparkles?

I am loving the new cosmetic items!

The enforcer cape should also now be destroyable.

So now i can use the destroy option but after i try to destroy it i get this message: 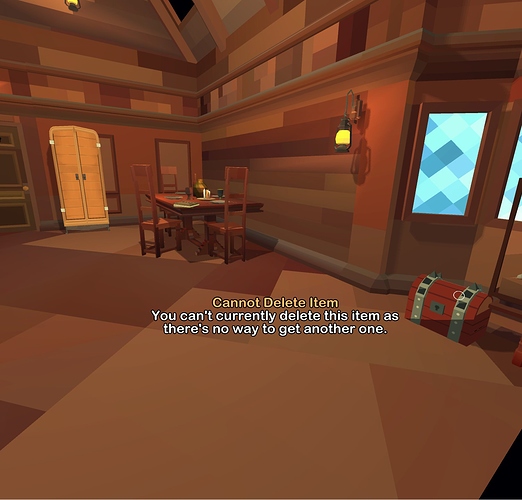 It would be great to get some more girly hats/options!

I second this, I may be male but I am also a fashion icon.

Can’t wait to get home and play!

There will definitely be more forthcoming including some girly options! We weren’t really sure how popular it would be so like all things we do we did just a bit of it to see how the community responded, but the response has been overall very positive and so we will definitely be rolling out more in the future!

This is a bit ot but, I love how responsive yall are to players voices. Its very impressive considering the size of the dev team. <3 yall rock.