I was wondering if anyone else is having problems with their PC audio and if there might be a fix i haven’t tried. When i go into orbus on PC, all game music and game sounds work great. The problem is with other players- either i don’t hear anything, or i hear them speaking but the audio is super glitchy and breaks up. I have tried the following:
-changing audio setting (both speaker and mic) on PC to “quest 2”

Nothing seems to work. There have been 2 times where i got the audio working- one was during a random game, i switched from push to talk to voice activated. The other time i opened discord, made a call, and miraculously i could hear everyone in orbus.

Has anyone faced this before?

Are you in an Oculus party? I think I remember something about that

I’m using a quest 2 and link cable to pc. I thought i figured out the issue, but it worked for a day only. I have 2 usbc cables- one with double usbc and one with usb to usbc. My computer has a usbc port so i tried that- audio still bugged. USB port worked yesterday but today it’s back again. Idk what to do because the game plays flawlessly other than the voice bug.

So I had the same problem when I used my link cable for the quest it’s basically an oculus issue because at least for me it didn’t work on other games but to fix it what I did was start up the game log in and go to audio recorder on you pc (assuming it’s windows it should be built in you just need to search for it in the search bar in the lower left) you record your voice for like a couple seconds then you can stop and everyone should be able to hear you. you might need to do this for a couple of days before it’s fixed permanently.

Edit: Now that I’m rereading what you said it seems to be more of a you can’t hear people then they can’t hear you, so my fix might not help much. I would try to go into other games and see if it’s still glitched.

There is a very easy fix. If you have more than one mic source (and your Quest is a another source), the computer gets confused about which mic you should be using. All you have to do to fix it is this:

(This is my set up, and how it should look if you are using Virtual Desktop with the Quest to connect it to your PC). 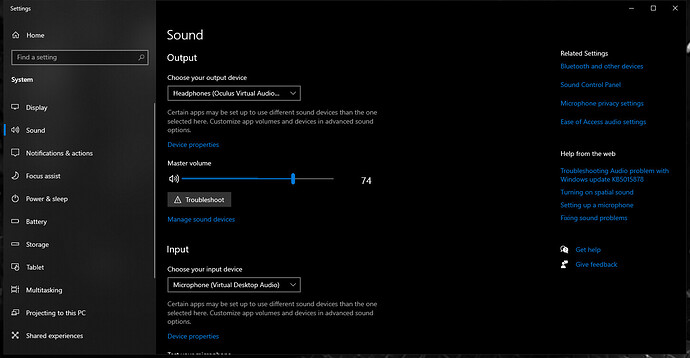 Well, I’ve had my pc set to oculus the whole time…here’s what’s really confusing me. I hopped into VR chat and everything worked. Hop into Orbus and nothing- no audio from other players or myself. It’s so weird. I can’t be the only one with this issue can I? The PC is only a week old