So I’ve been thinking about this a bit and it would be good to see those big old nasty world bosses we used to have come back in reborn, the mechanics wouldn’t really need to change at all, as it will still be kill-able with the way they used to work, maybe just have them 20 years angrier and more powerful (scaled for level 30+)

I was thinking to keep the current world bosses relevant have 2 rings added as drops, one from each, but also have it so we can infuse all the stats on rings on to other rings, this way, you can have it so all the world bosses are relevant, right now, chaos giant gets ignored most of the time because it’s rings aren’t that good… but if we could infuse the stats on rings then all the bosses would then be good to do all the time, what I was thinking was have one of the bosses drop a better version of the Luck ring

And then the other drops, a low stat ring, which you can then infuse all the other rings into, to make it so you farm that ring and then farm all the other rings to upgrade it into something amazing, it will take lots of work and team co-ordination but will be rewarding in the end and encourage group/social play which is what this game is great for

With the way the current zones are set up it was mean both of them would be in the Rainforest as the desert is there now you could expand the zone to the North-East and with the new climbing mechanics we could access Elongata just like how we used to have to climb in the old game but rather than the ithecac potion, we can use the climbing mechanics from the DLC in the overworld to gain access, here is a rough idea of where they could be, where they are close enough to a graveyard that it won’t be total hell, and still with-in the Rainforest/Desert zones, I added 8 black dots as Elongata used to take 4 classes to summon, now there is 8 classes, so 8 rocks 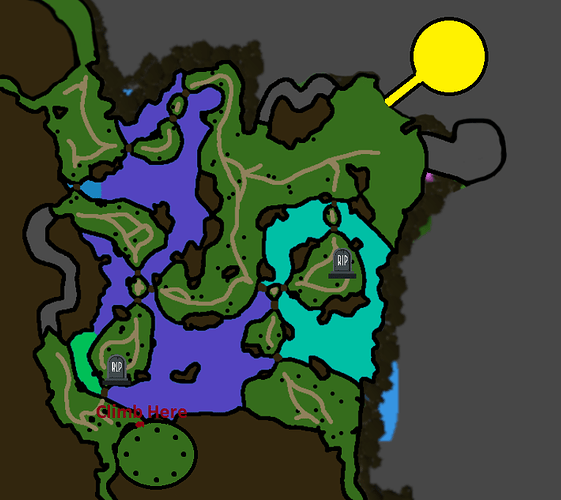 Making all ring stats infusable would be fantastic. And I’d love the return of the worldbosses.

Oh I really love this idea!