Hi everyone, today we have a preview of the new Battlegrounds map we’ve been working on, along with quality of life upgrades to the battlegrounds experience in general!

Additionally, the 4 year anniversary event will take place starting on the 18th. You’ll be able to get a cape, cake and pick up the penguin suit if you never had it last year.

Read all about it: Upcoming Content: Temple of Ma'at Battlegrounds 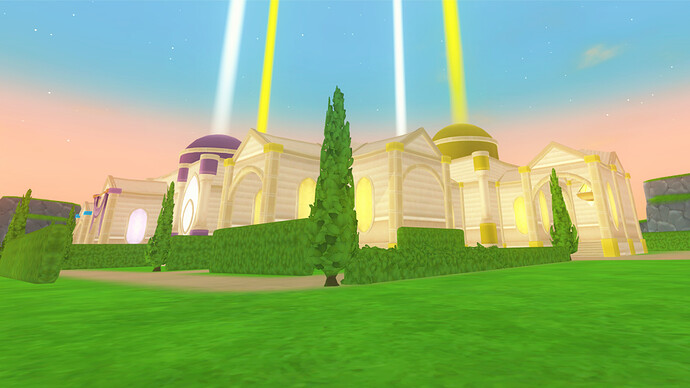 Is Ma’ats temple a cannon place?

Undecided on if I like the beacon changing colors when the flag changes teams.

Thank you, this looks very cool.

My only concern is that with the Invisibility Potions; it will be close to impossible to tell if the player is actually invisible via game mechanics, or suffering from the invisibility/immortality bug.

it will be close to impossible to tell if the player is actually invisible via game mechanics, or suffering from the invisibility/immortality bug.

Not really, if an invis potted player hits you, the invis pot ends(and vice versa if you manage to hit them with an AoE or something) while a broken invis player can keep hitting you and stay invis.

Thank you Devs for bringing some much needed QoL changes to battlegrounds, the beams will be a really big help to keep track of what flags you have and don’t have. Paying attention to the text while fighting is just a pain lol.

I’m excited for those new invis pot enemies so that I can use them to start wound chains to try to make pvp warrior playable.

Also this might make musket marginally more useful cause nobody’s gonna be able to invis when I’m bouncing poison everywhere.

I’m still holding out hope for a ballence patch though. The new scenery will be nice but it won’t change the fact that we only ever see the same 3 classes get played.
In my eyes a great pvp player should be someone with a diverse set of skills, they can fight effectively, communicate, plan, adapt, and strategise with their team. At the moment being a good pvp player means ignoring everyone else on your team and just 1v4ing, running blindly into the enemy team trying to get at least 2 kills before you die. That is the problem with the excessive damage output of scoundrel and mage. Being good at your class should not afford you the right to just ignore your team.

awesome, i cannot wait for invis one-shot scoundrel, it will be so much fun!!

Are there any plans to add new dungeons or endgame content anytime soon?

Also it would be great if there could be another Q & A in the near future.