What's after the new dungeons?

I know that there probably isn’t an answer but in case there is I figured I’d ask.

Hoping for a chaos realm raid

Rise of Rupert DLC chronicling the events of Rupert during the war that happened between Preborn and Reborn!

That would give DLC for revenue, more content for players, newer players could learn the lore of the world and why it is the way it is, we could get OG locations back to appease preborn players, the possibilities are endless

Yes preborn locations please. Miss them so much

Holy s*** this is brilliant

If the devs didn’t hate preborn as much, and if the art style were more similar, this would be really cool…

I would like another raid, maybe using some of the mechanics of Preborn bosses. There were some really fun ones, and while the models might change I really liked the mechanics of bosses 3 and 5. There’s also tons of cool ideas from Tradu that could easily be remodeled for a new raid.

I don’t think it’s that they didn’t like it it’s just the fact that all assets like bosses, rocks, or trees had way to many triangles then they needed causing more lag so they wanted to make there own assets with fewer triangles, and for the boss mechanics it was a long stream of spaghetti code that was also more complicated then it needed to be so if they were to bring back preborn they would literally have to restart

That said, VR hardware (HMDs and the power behind the cables) as well as standalone HMDs have become more powerful over time. So it is only a question of time before they would be well into their right to stop support for f ex my old Rift CV1 and the Quest (1). Which in turn means a higher triangle count in any given scene. And that lag is graphical client lag only though unless they are doing something really weird that they shouldn’t

Regarding their code, hopefully they standardized a lot of assets in Reborn (or have optimized them later on), to be more reusable (inheritance and instanced properties). And if that is the case, apart from models and rigging, adding in new (old) stuff should be quite easy.

But we’ll see what happens

Edit:
Oh yeah, and before i forget… It is such a shame that this game (and many others) use Unity at its base these days, when UE5 has released with Nanite and Lumen. Hopefully though, Unity will figure out and add similar tech in their engine before too long. And if that happens, and isn’t too performance heavy, that is going to do a LOT for what can be done in VR!

Yet. Also, it still requires a more generally beefy setup. But the “future of not worrying about polygon count” is definetely coming. And it’s just a matter of time before that also goes for VR. And personally i can’t wait for that hahaha

UE5 has gotta be the coolest thing I’ve ever seen, and I despise UE. 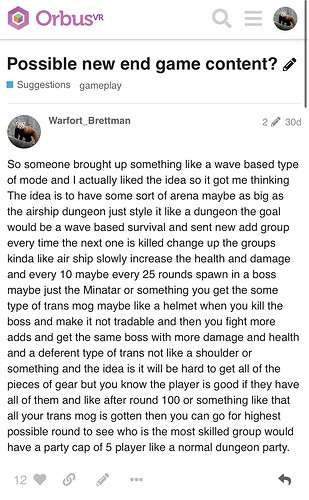 Both could have somewhat predictable scaling per wave/set of waves.

For the set team, it would be easy to assume the player count is 5 (although, now that we are talking about it, why not even have a raid style endless dungeon as well!). In other words, the scaling here only needs to consider difficulty and perhaps player levels.

For the public event, amount of participants would have to also be considered and probably for mob hp scaling versus a time limit (and as before also +/- participant levels).

I made my post for 5 person party, now a raid party for it sounds fun and cool but I’m worried with the amount of adds and people the game would be very laggy and unplayable

After all, the game has to be able to handle it, since that is a networking issue, not something VR specific