My Current Progress towards making a build that beats Scott's build

I think my next step is modifying it to calculate the actual damage numbers to take into account those empowerment damage buffs and flame cards to see the full impact. I probably need to do some statistical analysis on how it affects the tile sets too because even though I don’t think it should really have any sort of effect on them, its such a minor improvement over the old build that that if it causes them to have even a tiny bit more interference or downtime it could nullify the benefits.

Damn, my head hurts a little already (might be the 6 pints i just had on the local bar though

). Still gonna just be burning every card, but big thumbs up for trying to push the envelope!

update 2:
using Scott’s GREG program that simulates tile procs for different playstyles if figured out that this tiles set is marginally better than the normal one (the only change is that I added an F looking rune at the end of the fourth one). it gives 14.77% buff on average instead of 14.74%

image438×901 59.9 KB
again the improvement is so marginal that in all likelihood it really does not matter but Scott’s build is already so refined that I have to take my victories where I can get them
1 Like
Infiniterune January 16, 2022, 2:51pm #4

update 3:
I HAVE OFFICIALLY DONE IT GAMERS
I BEAT SCOTT"S BUILD

using scott’s GREG program I was able to prove that my strategy is theoretically better than the old one.
(all of the builds are running the same tiles and the program simulates the theoretical maximum human output of a strategy so it accounts for time needed to perform actions. numbers are average dps)
scott’s build without intentionally choosing to empower poisons: 105,000 dps
scott’s build intentionally empowering if you draw an empower and have a poison on belt: 105,500 dps
My build: 106,500 dps

For real though people struggle with Scott’s build already without needing to track the contents of their deck so I don’t think people are going to be trying to do this for like 1000 more theoretical max dps. In the process I did figure out a lot of much more useful information about scoundrel which I’ll put in a post below this

The last tile for both of the healing set are the weakest ones and not running them will lower the effective buff by only about 1% for both sets. If you are running this on a secondary set of armor I recommend only using the first 4 to avoid having to carry an extra gun
For that same reason I recommend you put the last tile of the Scott’s build posted above or the first tile of the lavawhale’s build posted below on your gun because those tiles are the best tiles of the 5 to combine with the first 4 healing tiles of their respective builds

I absolutely would not have been able to do this without scott’s help because his simulation program is absolutely amazing and I’m probably going to continue to modify it to allow me to improve some tiles for other classes too.

Ohh also I was able to prove that my hybrid scoundrel build is definitely better than lavawhale’s build
Hybrid does 98,500 dps
lavawhale does 92,200 dps
and this is with using the flint but not gaining any benefit from the weak applied by the flint card so if my weak actually matters thats another 3,300 more dps that hybrid does 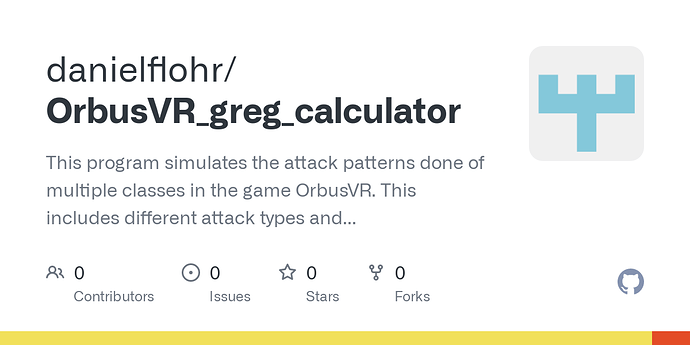 This program simulates the attack patterns done of multiple classes in the game OrbusVR. This includes different attack types and the triggering of tilesets. - GitHub - danielflohr/OrbusVR_greg_cal...

That’s awesome infinite, thanks for including my build in your calculations, along with your healing modifications! I’d really like to test the healing variation, I’ve always been a bit hesitant to do healing tiles because unless you have a bard with their wide range, you don’t often get to re-up your healing procs because you don’t hug mobs enough to get bounce heals from your musketeers unless they are being very careful to include you (bouncing off a turret near group)

I ran the program with simulating bard healing instead of musket without changing the tiles at all and they actually give even better buffs with bard healing
they gave 17.72% effective buff
under the effect of healing my non-healing improved LW tiles also go down to
bard: 11.01%
musket: 8.08%
For the most part its probably smart for players to default to just running non-healing tiles and just run an extra armor set late game if that’s their main because for a lot of fights, you aren’t going to be near enemies and receiving healing. late game though I definitely think carrying the extra set is worth it because getting more than 5% extra damage is a lot of damage and a lot of raid bosses run bards or heal the dps. Also sometimes you might just have a bard in a dungeon. Its basically free damage sometimes if you are willing to spend the ore.