Today we are launching the beta version of The Coliseum which is a 2 player wave-based dungeon. I will get into more detail on mechanics and what to expect but first I wanted to take a second and share with you how this came about.

Development:
We have wanted to do a wave based dungeon type game mode for a while now, but have not had time to make this a reality, so instead we approached it from a different angle. Using our existing systems of monsters and bosses we put together something that we think the players will like (which took very minimal development time with some minor tweaks). With that said, this is very much a beta product, and depending on the feedback from the player base, it may just stay that way or may be removed completely. If this is something the players enjoy spending their time with and feel like this adds something fun to the Orbus experience then we will look into putting real development time into it to create a true new game mode based on player feedback (this would be next year).

What to expect:
I want to stress again this is a beta test. There can be bugs, but we’ll also be making changes to it as we progress to see what works the best like number of players, monster groupings, etc.
There are no rewards for participating but you can still earn XP.

Future plans:
We are planning on making some adjustments as we gather feedback, but will not be making any adjustments to the difficulty, monster groupings, or player number for the first week or so to ensure everyone has a chance to try it out as it currently is. We will gather up all the feedback and make changes from there. We do not have any development time scheduled for this until after the new dungeon has been released along with a few bugs we are working on. Any major changes to this feature will happen the beginning of next year (if needed).
With that said, we look forward to hearing your feedback on this feature; I just want to set expectations of when changes could possibly be implemented.

We are looking forward to the feedback from the player base, and we’re excited to share more details about the upcoming Chaos dungeon in a blog post in the coming weeks. Until then, hopefully this can help pass your time inside of Orbus!

This was unexpected, but certainly appreciated

Sounds exciting! I’ll try it right away, and tell my fellowship about it too.
Question: are there any plans for prizes in there?

I think this is great! I was literally just asking some people in a shard yesterday what they’d think of a wave-based activity in Orbus.

After having completed it now, I do think allowing parties of 3 in its current state would make it too easy, but I’d also like to see the difficulty increased and, depending on how difficult it becomes after some feedback & changes, maybe a party of 3 would feel good then.

I love the idea of rotating the enemies in there so it’s not always the same every time, I guess this could be like a weekly rotation or something.

Would love to see a leaderboard for it, maybe based on like fastest completions. It would also be really sick if it dropped unique rewards eventually.

a couple things after clearing this for the first time

would it be possible to re-use the same level-syncing used in battleground for this instead of just making it level 40? that way its completely fair to new players or low-level alts.

also, would love to see this drop more “flex” than practical items as a reward once rewards get added, possibly

suggesting capes and titles since (i assume) it’s pretty easy to add those to the game compared to other types of items, and this game could use more cool titles imo

The mobs wont auto aggro you if your not directly on top of them, so you have a breather in between waves, and could even change classes if you choose from wave to wave

i think this should stay as-is, i don’t think this would be as fun if you couldn’t hotswap classes. also, no offence intended, but the game is way too buggy right now, and there needs to be time within waves for people to relog if necessary (i had to relog 3 times during my first run)

overall, i can see this being one of the most fun parts of orbus if it gets expanded upon with more waves and rewards, and if the difficulty was a good bit higher

I’m glad you took the time to add new content that doesn’t require a full group and isn’t just another dungeon, totally support more things like this!
Logan and I logged in after a long time just to try it out and we had fun, here’s my feedback:

I think most of what I have to say in terms of mechanics and tweaking has already been said, so I’ll focus on further developing the idea a bit instead.(I did like it tho, with changes mentioned previously I think it’d be fun)

Since this is in a coliseum, a place where historically people would fight for the entertainment of others. It’d be really cool and fitting if an instance could be set to open and allow players to join as spectators on the side lines.
Keeping with the coliseum theme, there could be a vendor selling rocks, tomatoes, etc. which players can throw at the players fighting, which would stun them a little(The rocks/tomatoes would probably have to be homing for there to be a chance of actually hitting). The vendor could also sell different boosts that the players could buy and throw into the arena, which the fighters could use to help them. Basically allow spectators to interact with the ones fighting, wither making it harder for them or helping them to make it more interesting.
Maybe a percentage of the dram used on these items would go to the players fighting.
You could even bring in betting and create a whole economy thing around it. With betting there is also another incentive for hindering/helping. Maybe you bet on them not making it, but they’re currently doing pretty well, so you throw some rocks at them to maybe make them trip and vice versa.

I think it could be a really fun activity if it catches on with the community and events are organized regularly.

I have one suggestion, if it comes to the main game can it have lore

It could go something like this… after slaying the water wyvern we have caught the attention of the god or overseer and they wish to watch us fight more but they can’t get us into their realm so they bring some of it into the astral plan for us to fight in and use our own memories as the enemy’s we fight (this would explain not only why we’re fighting things we’ve already fought but also why we’re fighting animals, the higher being would have no knowledge on what a Chicken is so with it just going off the fact we kill them all the time it makes sense why they would think it’s actually a threat) the reason we would be able to leave when it seems no other fighter is allowed to is because we’d be under the protection of N’shu - god of the astral plane letting us slip from the hands of whatever magic would keep us there

After trying it a few times and seeing the same result over and over, here are my first impressions:

(I know so many of you guys will disagree. I’m ready for being smashed in critics)

Here are the facts: No one can progress this if not using Runemage, or at least if one of the players is not using that specific class.

I know that we’re talking about a class that demands quite a lot of dedication, training and… more training, so it gets really useful. So, it is understandable that it is powerful for that reason.
How bout players who can’t invest so much time in a specific class? How bout if I’m not into drawing runes at all?
A player can run from wave 1 to 25 speed-casting over and over. How bout some type of mechanic that blocks magic attacks for a boss? How bout making a specific wave being hurt only by a specific class? This way players could be willing to use other classes as well.

I like the coliseum. As others have said the chickens are probably the hardest round (definitely beatable but unexpectedly buff). I hadn’t read this before entering so I was expecting a door out to appear when we beat it.

The squipees/squipees, the floating multi-eyed squid creatures from the cove, both in cove and coliseum can’t seem to be interupted when they go to ink. It’s a waste of a stun/pushback/charge.

If octofang gives birth to baby spiders, the stafrushers appear while the spiders are out.

Scav shaman calls for puzzles but none appear.

If you get lich king to one side, death burst won’t hit you on the other side (it’s beyond the max distance for the burst (likely expected).

The last boss should be boss 1 from the cove rather than lich king again. It’s a challenge and doesn’t rely on things from his room to do his mechanics.

Dungeon troll should be before lich king if it’s meant to get harder every wave. Troll is not a hard boss.

I haven’t played the update yet but this comment seems hard to believe. I can’t think of anything a runemage can do that would make it required for a wave based arena.

And even if it were for some reason, punishing players for playing a certain class is a sure way to drive away part of your playerbase, which isn’t something Orbus can really afford to do at the moment.

If there is any player who managed to get past wave 4 not using runemage, please let us know. I just wanna make sure it is possible.
I tried all 7 classes except runemage. The chickens crushed me all the times. They took longer for tanks but as those don’t deal enough damage to get past, I couldn’t survive to the end.

I got through without a runemage. Used a pally and a musky. Didn’t use a runemage once in the whole 25 waves.

At some point I expect someone will do it with two bards because everything in Orbus seems to get a bard only run at some point.

i did it solo on paladin, just takes longer. kiting seems to be able to be done infinitely on them so you can stall for as long as you want

The introduced the tavern keeper’s husband with a gambling problem and the loan shark he was indebted to. The coliseum could be something he gambles on.

Question: will the bosses in the coliseum count towards long terms? (if so, Chaos Hunter would be a nice add)

Noticed a couple of bugs with the boss mechanics (e.g no poison pools from the shaman, and the Litch King’s circles do not always show up).

Made sure to record the experience. XD 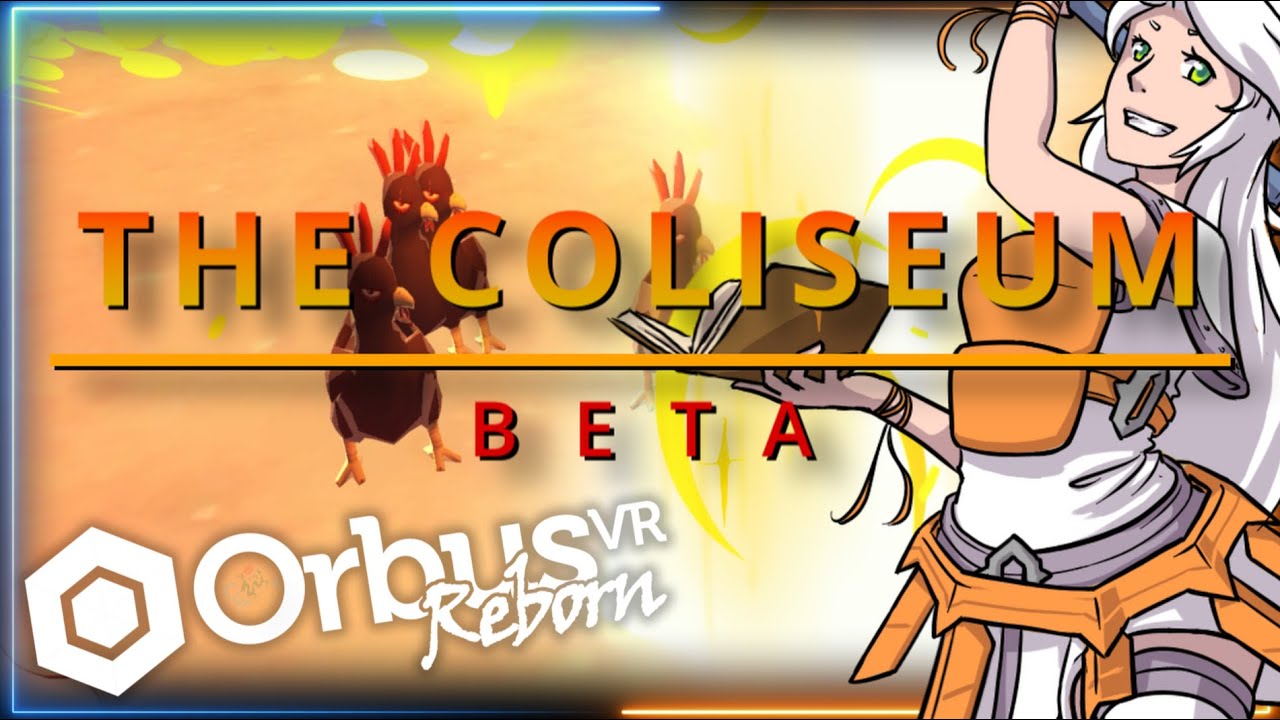 If this get’s further developed, I’d love to see there be infinite waves, gradually getting harder and harder.
Then some sort of leaderboard with furthest wave reached would go well with that.
I much prefer the idea of competing for how far you can get, rather than how fast can you do it.