The Bard is getting a lot of changes in this beta, so please let us know what you think about it!

To de-activate an activated instrument, now you swipe your mallet down through the orb, rather than tapping it. Tapping it will only activate an empowered (crescendo-ready) instrument.

This broke switching between different orbs in combat, as you can now not turn off orbs. Changing it back to the old system would not be a bad idea. The only way to change orbs, is to swipe thru another orb, changing only the first selected orb if you have 3. This only changed the first selected though, which means you are stuck with the second and third selected.

Collision detection of playing notes has been re-worked to provide much better detection.

I don’t know how to explain specifics with this one, but sometimes notes will randomly miss, and when my fps lags much more tend to miss. With the previous hit detection this definitely did not happen.

Ok, found out that you can double tap the orbs in combat to turn them off, however this is extremely inefficient in combat to do, maybe a raid boss wouldn’t be so bad, however pvp and some solo pve content do get affected. I would still enjoy a revert to the new swipe thru and double tap system in place. Not sure how other feel, but once you got used to the old way, it did get much easier.

Also double tapping an orb with a crescendo results in the crescendo visual glitch from previous betas.

Would it be possible to switch the Bard’s xylophone to the Key of C Major? Pretty much every basic song for a xylophone that you’d find online is in the key of C Major. Right now it looks like it’s in the Key of G.

Is it intended that a Bard can’t continue to play notes on an instrument until they crescendo? So the Crescendos are just something you use right away, and not something that you save for the right moment?

I’m having a hard time aiming the marimba, since it now follows your torso. I also find that it ends up aggroing enemies I didn’t mean to attack, since the shots fire off at random angles.

There is a bug where the crecendo animation can get stuck on an orb. 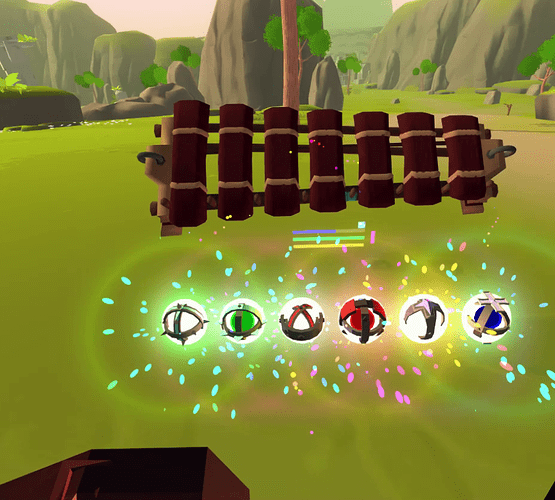 We should have a fix for this soon.

(Seriously though, I gave bard a quick try in the last beta and was unimpressed. Talents and the rework really make the class sing, pardon the pun!)

I’m having a hard time aiming the marimba, since it now follows your torso. I also find that it ends up aggroing enemies I didn’t mean to attack, since the shots fire off at random angles.

(Seriously though, I gave bard a quick try in the last beta and was unimpressed. Talents and the rework really make the class sing, pardon the pun!)

We’ll try this out in the next build, letting you keep playing notes even with crescendo filled and see how it is and if it causes any issues.

The Bard’s marimba now has 7 notes instead of 5.

This is an improvement, however the reason a lot of us wanted more notes was to play cool songs in highsteppe. Some of course wanted it for more difficulty however it was a lot of asking for more notes to play more songs. These 7 notes are not enough to fulfill this want, the desire to play these songs in highsteppe; the reason for this would be two factors: 1. We have what seems to be an incorrect scale for what we can play on the marimba; what I mean by this is that the scale should realistically be on a c major or a minor scale. The far left note on the marimba sounds like it is A2 or two notes below middle C. Due to only having 7 notes we are only able to play songs in A minor. The second reason is due to not having sharps and flats, not only do they help considerably in finding which notes are which, let us play different songs that include sharps and flats (almost every song besides a couple) but also allow us to play in a different key and therefore let us play even more songs.

Is it intended that a Bard can’t continue to play notes on an instrument until they crescendo? So the Crescendos are just something you use right away, and not something that you save for the right moment?

We’ll try this out in the next build, letting you keep playing notes even with crescendo filled and see how it is and if it causes any issues.

I guess this change is fine,makes it easier for me, but as a bard it was less about using your crescendos right away, but instead saving important crescendos while using others. For example if you put on both your damage orbs and then gentle healing, you are going to want to use your healing when you need to, rather than right away. So, save your healing crescendo and with only the two damage ones non-crescendo you should be able to keep your bar up. With other orbs it’s more about finding a good rhythm between which crescendos to save and when you need notes to be falling.

Something like this is fine, it just removes a bit of the skill aspect away from from bard, something that I could compare this to is if you could passively generate orbs as a paladin in combat (or you can turn it off because in some fights this wouldn’t be good, but still it coincides with my point that it takes some skill away).

Ok, so I think I finally found out why crescendos would randomly not work (I created a new thread for it here after a while of it just not working sometimes). It’s dragons. Apparently while we were doing a dungeon one of my party members told me that my crescendo had healed my dragon. I then told everyone in the party to take their dragons off of themselves and my crescendos started working like they’re supposed to.

Still not 100% on this because not much testing, but this is probably the solution?

Hmmmmmm…I put in a check for this just in case in the patch going out later today. It doesn’t look like that’s what should be happening, but doesn’t hurt to try it out.

I also made it so that all smart heals always fire and go to someone even if eveyrone in range has full health (it will still prioritize lower-health targets), that might help clear it up too.

So they kept failing without dragons this time (like I said not much testing, maybe just got lucky) but either way there are two other things that could be happening. 1. The crescendo are just hitting the ground (because for some reason when the crescendos are used they go downwards then back up when they do work, which means that I could be sitting too low for them to work?) and 2, they are hitting my hitbox and not working (I think this happened with some other classes just forget which ones).
It’s really bad in dungeons when a game changing crescendo just doesn’t work.

The way they work they should ignore the ground and also only ever be able to hit their intended target; let’s see what happens with them always active, that might give more info.

could this be similar to the scoundrel hitting his hitbox or deck?

Bard is a blast so far! I like how it’s somewhat solo capable. Only changes I’d make - with a given set of orbs, it seems the song is set in stone. So once you’ve memorized the pattern that’s it. Maybe add some randomization? And having some kind of backup cool down would be nice, ideally a nice big knockback with a mid-long CD. Something to get a little breathing room, yknow? And maybe make the kalimba itself an offhand equipment, with different ones having different sound effects! That would be a great creativity outlet!

I do hope we actually get more bard orbs on release, I already made a post about some ideas, but I’m pretty sure you devs have really good ones as well. Mainly just because having 8 would be alright, if we weren’t able to equip 6. This only leaves two interchangeable orbs, which I think there should definitely be more options for a support buff/debuff class.

Also I wanted to mention, for the instrument of defense that puts a debuff on nearby enimies that makes their projectiles deal less damage, I, at least from experience, haven’t seen this debuff on any mobs or players.