Questions for the Dev Dudes V2 (other thread timed out)

The other thread timed out and is now locked so I’ve pulled all the unanswered questions from that thread and from a few of the other Announcement threads which didn’t get answered and put them all in one place, as it’s been almost a month since the last Q&A, if you want to see the answers from the previous Q&A you can find them here:

Once a month we are going to start posting Dev blogs that go over some of the most asked questions on the forums, as well as some questions we are asked in-game while meeting with the community. The blogs will be in addition to our regular responses...

For our second Developer Q&A we have pulled some more questions from the forums and ones asked in game. Could you do like a report of them from the start of reborn? All stats below are from Reborn's launch until now-- Hours Played: 1,071,672 ...

When will you remove the cap for turning in points for the Explore the Realm? We will be removing the 2,000 points per week cap on August 4th. From the 4th until the end of the event you will be able to turn in as many points as you

Also, when should we expect to see the next Q&A Blog post?

+1
also,
Would you consider extremely rare truly Unique gear or transmog items that would be highly sought after by endgame players?

Can you provide proof of life of @Riley_D? I know he took a step back from forums but we have yet to see any proof that he’s still alive. Before we send the ransom, we need to know he’s okay.

Bump, been a month and a half since the last Q&A, any ETA on this next one? This week? Next week?

When will knuckle support be added? Since I only play runemage Orbus is now literally unplayable

The knuckles also make casting Frost 3 different since I moved from Oculus. Other spells are similar enough, perhaps not Pushback 2 not sure yet. I could speedcast Frost 3 infinitely but it is now a struggle to relearn. It absolutely comes down to position of the wand, possibly the orientation of the controller vs my hand, but where the wand is positioned vs my body. I was wondering if this is due to the difference in controllers (thus perhaps having a different skeleton/angle) or if the knuckles are using the vive controller skeleton which makes the position of the wand incorrect. Kind of sucks it’s not universal since my hand has not changed, just the controller.

You can adjust the weapon position/angle you know…also I too thought originally the wand angle/position is what mattered, but it mostly comes down to the controller and how you hold it, you’d be surprised how little the wand angle/position actually matters for most spells.
For casting its just about relearning muscle memory, for me it helped to loosen the strap and hold at the bottom of the controller instead of the default grip.

Only Frost 3 has had a pretty noticeable difference, by a lot. I can still cast it but I suck at it compared to nearly 100% cast rate w/ speed.

As for changing the position/angle, you can… but you can’t. Via Steam, I wouldn’t know how to replicate the Oculus Skeleton. Via Orbus the in-game adjustment is a joke, grabbing the item and repositioning it in the air is only useful for bulky stuff like tools/class abilities, and not things you need to finely aim and control like wands. Not scientific at all such as setting a number value and offering information about what the defaults for Oculus, etc are. Might be a local file somewhere though I suppose.

Like i said in my other reply, you’d be surprised how little the angle actually matters, so for that the in-game adjustment is more than good enough. It really doesn’t need to be super precise.
For frost 3 you’ll just need to practice more again and get used to the new controllers.

Here’s the angle of the wand when I hold my arm straight out. On Oculus, the bars are on top. Harder to see the other small angle differences besides the left/right rotation thanks to the hp bar. I understand adaptation is not insurmountable, but I refuse to say it doesn’t matter. The muscles being used are also different, and it just in general feels awkward to twist my arm so far to the left. The default skeleton should be much better than this. 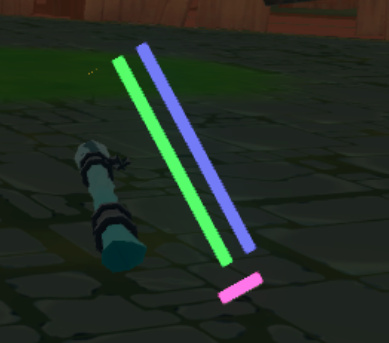 The in-game weapon adjustment definitely helped immensely. I despise the fact that I can’t select the rotation by number…or that it doesn’t give me a holograph of the default positioning (to include distance away from me). But it should be workable, just extremely meh to the maximum.

I noticed this much earlier on but for anyone else moving from Oculus: Ensure your vive or index is flattened against your face by pushing it in or casting will be hell for you.

I have also noticed that my bow shots are going a lot more to the right than where they should be with the index controllers.

I love the new controllers! So much better than the old ones! I’ve noticed the angle discrepancy as well. The hands definitely seem to be 30 degrees or so off from the actual hand axis - this makes guiding spells with the off-hand really awkward (you point your actual hand at the floor) [image] In the 20ish minutes I played last night, I didn’t notice as much of a discrepancy while using the Bard mallets or the wand though. Either the angle is set a little differently for each weapon, or some… 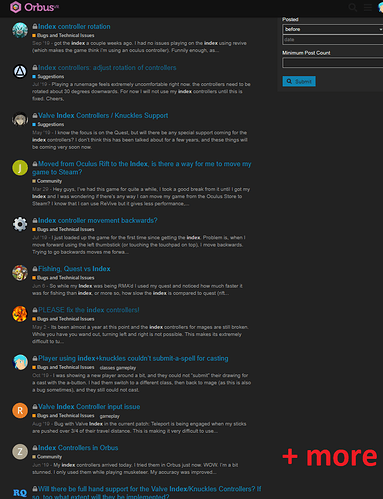 After loosening the hand-strap where it doesn’t touch my hand anymore, holding it from the bottom, and carefully adjusting the wand location - these babies seem to cast even better than the Oculus controllers. Like, somehow, significantly easier (although still different & still adjusting). In particular my D-cast has never been this good or easy, which might say something about the weapon adjusting but I feel it has more to do with the controller shape themselves (better grip & stays flat effortlessly). Pushback, while never hard, also is noticeably easier. Frost 3 is basicallllly back again and pushback 2 is getting there. Still struggling to be as good as I was before with a few spells like fireworks/polymorph. I can also see better with the index but that should only matter a little bit.

Default skeleton should definitely still be better but thanks for the tips!

Now if only we could strafe…

We’ll have the next Q&A post up later this week, just wanted to let folks who have been wondering know.

well… we got 10-11 questions answered out of those

when will we hear more about the new perks?

We will have information over the new overleveling perks in a blog post in July, along with the mystery item I’ve referenced a few times already in blogs.

My guess would be next week

If you are native to Steam your contollers are bound at 45 degrees up like you were holding a vive wand instead of an oculus touch.

this actually makes it easier to cast Frost 3 but makes other spells more tricky … I wonder if “Hardest Spell” discussions are based more around what wand orientations people are using and less the spells themselves.

but if in touch pistol grip you need to modify your angle to account for that 45 degree disparity which leads me to almost pointing my thumb at my chest to cast frost 3.

Edit: nevermind this is probably intended. Keeping post below tho.

This rune as far as the community has surmised is a rune that procs when your hits are < 1.5 seconds each (or casting delay?). However, going below 1 second makes it fail to proc.

Intentional values or not?

I use M/N but having the G rune in the arsenal while not required, would be an addition.